The Bureau’s ENSO Tracker status has moved from ALERT to EL NINO, signalling the official declaration by the Bureau of Meteorology of El Niño 2015.

Australia will be hit by a “substantial” El Niño event for the first time in five years, heightening the chances of widespread drought and warmer temperatures, the Bureau of Meteorology has confirmed.

The BoM said the El Niño phase will become the “dominant influence on Australian climate during the second half of the year”. The tropical Pacific is already in the early stages of the event.

The bureau’s call comes days after Fairfax Media predicted the declaration would be made on Tuesday.

“This will be quite a substantial event,” said David Jones, head of climate monitoring at the bureau. “It’s not a weak one or a near miss” as in 2014, he said. “This event is perhaps running ahead of where the models had predicted.”

In 2014, the BoM anticipated an El Niño period due to warming oceans, but the atmospheric conditions did not tally. The confirmation of a full El Niño event is the first in Australia since March 2010.

“The most obvious thing we know is that El Niño events tend to lead to drier winter and spring periods,” Jones said. “There is an increased risk of drought which obviously isn’t good for people already in drought.

“Australian temperatures are already warming and El Niño tends to give those temperatures a boost, so we’d expect winter, spring and even early summer to have well above average daytime temperatures.”

Jones said that despite the El Niño event, it was “very unlikely” that 2015 would be Australia’s hottest year, due to cooler months in the first half of the year.

However, he said there was a “significant probability” that the world would have its warmest year, beating the mark set in 2014. 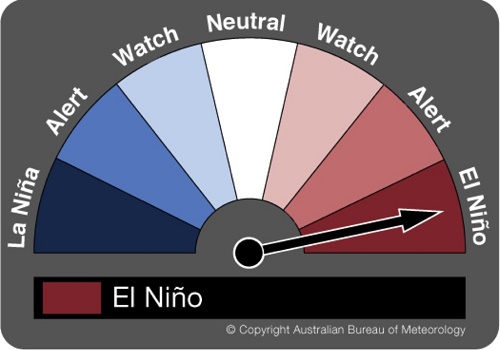 Modern definition of an El Niño

The name comes from Peru, where every few years around Christmas (the time of the birth of Jesus “the Boy Child”, or “El Niño” in Spanish), the anchovy fishery would fail as warmer water replaced the normally cool, anchovy-rich water along the South American coast.

So that’s it in a nutshell – we have El Niño on our hands.

The criteria for calling El Niño are on our ENSO Tracker page, and in short we need to see at least three of the four following things:

Early signs of El Nino emerged on Australia’s east coast, with a poor end to the wet season in Queensland and a dry autumn in Victoria, said ANZ’s Deane.

Australia’s high protein wheat output could suffer as an El Nino brings below-average late winter and spring rainfall to the east coast. Spring rains in September are vital for wheat yields in the fourth-biggest exporter of the grain.

Australia’s weather bureau, which in April projected at least a 70 percent chance of an El Nino emerging from July, on Tuesday said the weather pattern had already formed and that models indicated a “substantial” event.

The other countries bracing for an El Nino are China, Indonesia and Malaysia.

China typically escapes the fury of El Nino, but it is still on guard for its corn crop, which needs a lot of water, said Ma Wenfeng, analyst at Beijing Orient Agri-business Consultant Co.

For the Southeast Asian countries, concerns are about palm.