On November 25, The Associated Press released a news report which strengthens the beliefs held by many security analyts, that the Tehreek-e-Taliban 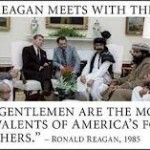 Pakistan or ‘TTP’ for short, a terrorist organization which repeatedly claims ties to the Afghan Taliban, is a fake group bred by the American intelligence community.

According to the report, the CIA had a secret facility (until 2006) near the main Guantanamo Bay prison, dubbed “Penny Lane“, where captured jihadists and fighters from Afghanistan were turned into double agents. This fundamentally required that those who agreed in being American spies would guarantee full cooperation in “killing terrorists” (or, in other words, targeting elements who are eyesore for the US).

Captives who signed up to be double agents were offered millions of dollars from the CIA’s (read American taxpayers’ money) secret account (Codename ‘Pledge’), along with safety for their families.

The militants who decided once and for all to end fighting American forces signed formal agreements to work for the CIA. One prisoner though, was reportedly forced into agreeing because the CIA threatened of harming his children.

Abdullah Mehsud can be described as one of the key founders of the TTP, an organization whose country-wide attacks in Pakistan have resulted in 15,681 armed forces casualties. Similarly, approximately 5,152 civilians have been killed and 5,678 injured in bomb blasts and suicide attacks since 2008. These statistics werepresented by legal counsels for Pakistan’s intelligence agencies at the Supreme Court on 26 March 2013.

Abdullah Mehsud had lost a leg in a landmine explosion in 1996 and was captured sometime later by Uzbek-origin Afghan commander Abdul Rashid Dostum while fighting the Northern Alliance. He was imprisoned at Camp Delta in Guantanamo Bay for two years and later, to much surprise and shock, released in March 2004. What’s even more astounding is that he was also gifted a prosthetic limb by his captors, according to a statement by Brigadier General Jay Hood who was then running the camp.

A document titled JTF-GTMO Information on Detainees mentions that Abdullah Mehsud was released because he “claimed to be an office clerk and driver for the Taliban from 1996 to 1998 or 1999. He consistently denied having any affiliation with al Qaida. He also claimed to have received no weapons or military training due to his handicap (an amputation resulting from when he stepped on a land mine 10 years ago). He claimed that after September 11, 2001 he was forcibly conscripted by the Taliban military“.

This same Abdullah was later named as the commander of Al Qaeda-affiliated militants who ordered his band of subordinate fighters to kidnap two Chinese engineers (one was killed during a rescue attempt gone bad).

The Afghan Taliban were displeased with the incident and reportedly booted Abdullah Mehsud out. They were also suspicious of his activities since he was mysteriously released by the US military “crusaders” from Guantanamo.

While in Afghanistan, Abdullah Mehsud had created his own parallel “Taliban” militia and proudly claimed while giving media interviews in Afghanistan, that he was behind a series of attacks on Pakistani security forces (unlike the Afghan Taliban who were focused on fighting ISAF-NATO). Upon his return through Zhob in Balochistan province of Pakistan, security forces were aware of his presence and raided the house of Sheikh Ayub Mandokhel to capture him on 24 July 2007. Sheikh Mandokhel was a leader affiliated with the Islamist JUI-F of Maulana Fazlur Rehman. However, before he could be arrested, Abdullah blew himself up.

It is worth noting that before Abdullah Mehsud was released from Guantanamo and dropped in Afghanistan, there were no attacks taking place against Pakistani security forces. This is where a large information vacuum exists and which must be explored further. Had Abdullah Mehsud created a new “Taliban” that would be America’s own brand of Islamists?

In an article for The New Tork Times dated 22 October 2009, journalist Scott Shane quoted an unnamed Afghan Taliban official as saying that for the Pakistani Taliban (TTP), “there will not be any support from us”. He added the Afghan Taliban “don’t have interest in fighting against other countries”.

Furthermore, the Afghan Taliban commander said their mission is to get occupation forces out (of Afghanistan) and “not get into a fight with a Muslim army”.

Many journalists and security officials in Western states have been alleging since long that the Afghan Taliban are aided by the Pakistani intelligence agencies. Had that been the case, their so-called assets would have prevented Colonel (retd) Sultan Amir Tarar alias “Colonel Imam”, their former teacher from the Afghan war era, from being killed at the hands of Hakeemullah Mehsud, the recently-killed TTP chief.

There are also many other incidents such as this which suggest that had the Afghan Taliban indeed been proxies of the Pakistani agencies, as is routinely alleged, they would have instructed the TTP to stop attacks on Pakistani forces. But this never happened. Instead, as reported earlier, more than 15,000 soldiers and high-ranking armed forces personnel from Pakistan lost their lives.

But then, the question arises, who are these Pakistani Taliban fighting a Muslim army (of Pakistan) which the Afghan Taliban do not wish to fight? Are they a band of militants who were recruited by Abdullah Mehsud and later on joined hands with Baitullah Mehsud?

The ominous release of Abdullah Mehsud, when reviewed today in context of the new disclosures published by the Associated Press, lay bare historical facts and confirm the fact that he (Abdullah) had been set free because he must have agreed on becoming a double agent for the CIA, hence the safe haven in Afghanistan and US forces not capturing him there again. This also explains why his ideological descendants who later on coalesced to form the TTP are hell-bent on destroying Pakistan.

This also explains why both the Afghan and Pakistani Taliban have been working on different lines, although appearing the same on the outset (basically we have the identical nomenclature to blame for mass confusion).

Felix Kuehn, renowned researcher on terrorism and author of “An Enemy We Created: The Myth of the Taliban/al-Qaeda Merger in Afghanistan 1970-2010″, said at an event organized by the Afghanistan Study Group and the Center for International Policy, that although the (Afghan) Taliban and Al Qaeda have some ties, “they are separate and distinct groups with different constituencies and different goals”. Kuehn had studied the Taliban and Al Qaeda closely while staying at Kandahar despite extreme risks to his life.

From a report by Bob Dreyfuss in The Nation:

For at least three years, Kuehn and Alex Strick van Linschoten have lived and worked in Kandahar, where they’ve studied the two organizations, lived with Kandahar citizens, and met people of all political persuasions there, including Taliban commanders.

Kuehn points out that the Taliban and Al Qaeda adhere to different strains of Islamic thought, the Taliban associated with Saudi-influenced, Wahhabi-style Hanafi beliefs, and Al Qaeda associated with the more radical, more rigid Hanbali school. The Taliban, of course, are Afghans, and Al Qaeda mostly Arab and almost entirely non-Afghan. Generationally, they are different, too, with most Al Qaeda leaders older than the young commanders of the Taliban, and whereas many Al Qaeda people are professionals and well educated, the Taliban are rural, unschooled, and grew up in places like Kandahar where newspapers were nonexistent and even radios were in the hands of only a privileged few.

When Al Qaeda arrived in Afghanistan from Sudan around 1996, says Kuehn, its membership was not more than 30. Al Qaeda fighters, and the growing number of recruits who came to Afghanistan from elsewhere, kept apart from Taliban fighters, who resented Al Qaeda, and there was a great deal of animosity between the two. Osama bin Laden insisted that international actions against the United States and other countries was crucial to his strategy, while Mullah Omar opposed such actions, says Kuehn.

“Osama bin Laden’s death will have zero impact on the Afghan Taliban,” says Kuehn. In part, that’s because they “didn’t have much a relationship to begin with.” Still, he says, it’s foolish to expect the Taliban to denounce Al Qaeda or to formally break with the organization, in part because bin Laden and Al Qaeda were Mullah Omar’s bridge to the Arab world. Yet when bin Laden was killed, the Taliban’s reaction was muted, and its statement—released via the Taliban’s semi-official web site—was mild and restrained. (If you haven’t spent time reading the Taliban in its own words, its web site is the place to start.)

Yet, we saw that Hakeemullah Mehsud and his groups under the umbrella of the TTP were openly supportive of, and aligned with, the global Al Qaeda. The attack on a CIA base by Humam Khalil Abu-Mulal Al-Balawi, who was seen in a video statement released by the Umar Media of TTP to be sitting next to Hakeemullah Mehsud, was most possibly a false attack which the CIA itself ordered as a stunt to prove it has no ties with the TTP.

Later, we saw Baitullah Mehsud, then Hakeemullah Mehsud (who lived in a luxurious $120,000 mansion), continue the legacy of this fake brand of Taliban. Or putting it more precisely, the CIA brand of Taliban. A group which has caused more damage to Pakistan than any other through brainwashed suicide-attack blasts, IED explosions, urban warfare, destruction of strategic defence equipment in use by the Pakistan Army, Air Force and Navy, bombing of ISI offices, murder of thousands of innocent civilians, beheading of hundreds of Pakistan Army troops, and what not.

It is most likely that the birth of these murderers’ ideology took place at the once-secret Penny Lane facility.

And when the controllers of these cheap hirelings and ignorant “holy warriors” of the Pakistani Taliban, who liaise between Langley and FATA/Afghanistan are no longer needed, they are simply disposed by being “droned” to death, just like Baitullah and Hakeemullah were. That is the destiny awaiting every worthless CIA asset.

Many sectors of the Pakistani society were well-aware of these facts but these mainstream revelations (still not complete though) are ample proof that the US has played a major role in destabilizing Pakistan, as it wants to avenge its own strategic blunders which it committed by unnecessarily invading Afghanistan.

The US needs it’s own Taliban to keep Pakistan engaged in internal house-cleaning and meanwhile give free space to India to attain what is has always desired: a large strategic stake in Afghanistan.