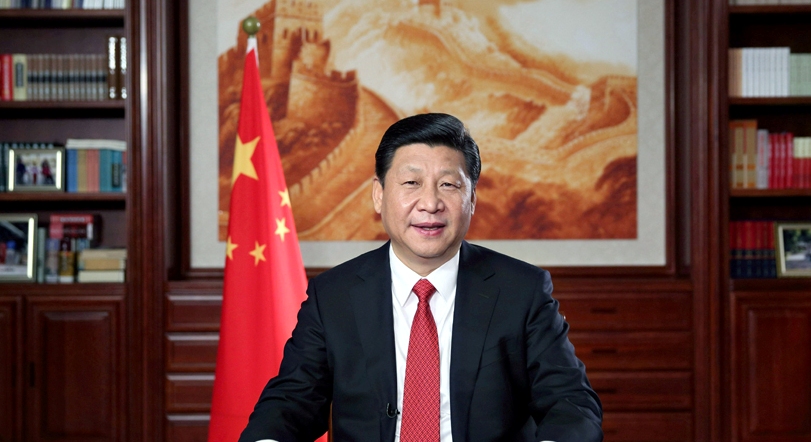 Chinese President Xi Jinping proposed to strengthen connectivity within Asia for coordinated development, open economy and people’s happiness.
President Xi delivered a key speech at a dialogue meeting on strengthening connectivity partnership, also attended by leaders of Bangladesh, Cambodia, Laos, Mongolia, Myanmar, Pakistan and Tajikistan.
Speaking to Asian leaders on on November 8, 2014 President Xi said Asian countries should be the priority in realizing China’s initiatives of building the Silk Road Economic Belt and the 21st Century Maritime Silk Road, or “Belt and Road.”
China is ready to provide more public goods for Asian neighbors through connectivity development and welcomes them to “get on board the train of China’s development”, he said.
Xi suggested that Asia should develop a basic framework of connectivity based on economic corridors, such as the framework in China’s “Belt and Road” initiatives, which accommodate the needs of different countries and include both land and maritime projects.
Asia should realize an early harvest in connectivity by making breakthroughs in transport infrastructure development, Xi said, promising that China will prioritize railway and highway projects linking China to the seven countries attending the meeting as well as other neighbors.
He announced that China will commit 40 billion U.S. dollars to establish a Silk Road Fund, which is to finance connectivity programs in countries along the “Belt and Road”.
He also announced to offer 20,000 training opportunities in China for connectivity professionals from neighboring countries in the next five years, in a bid to promote people-to-people exchanges.
When explaining China’s consideration of promoting connectivity within Asia, Xi said Asian countries ought to redouble their efforts to acquire new strengths in value-added, innovation, investment and market, and to cultivate new growth areas and new competitive edges. In achieving all these goals, connectivity holds a key link, he said.
Today’s connectivity should be a three-way combination of infrastructure, institutions and people-to-people exchanges and the progress in five areas of policy communication, infrastructure connectivity, trade link, capital flow, and understanding among people, he said.
“The efforts by a single or several countries are far from adequate,” Xi said. “Only by building extensive partnerships where all will think and work in unison, can we expect to achieve positive results.”
He called for Asian countries to join hands in achieving a coordinated development, building an open economy, improving people’s happiness and creating a platform of cooperation of Asian characteristics.
He stressed that the openness must “respect the sovereignty and territorial integrity of the relevant countries, accommodate their comfort levels and refrain from imposing one’s views on others or interfering in the internal affairs of other countries.”
Also attending the meeting were representatives of the United Nations Economic and Social Commission for Asia and the Pacific and the Shanghai Cooperation Organization.
The leaders attending the meeting voiced the support of China’s initiative to found the Asian Infrastructure Investment Bank and highly valued the country’s decision to found the Silk Road Fund.
They agreed that Xi’s proposal and ideas meet their needs, offer good chances and benefit regional and global peace, stability and prosperity, while expressing the expectation to work with China.-Xinhua