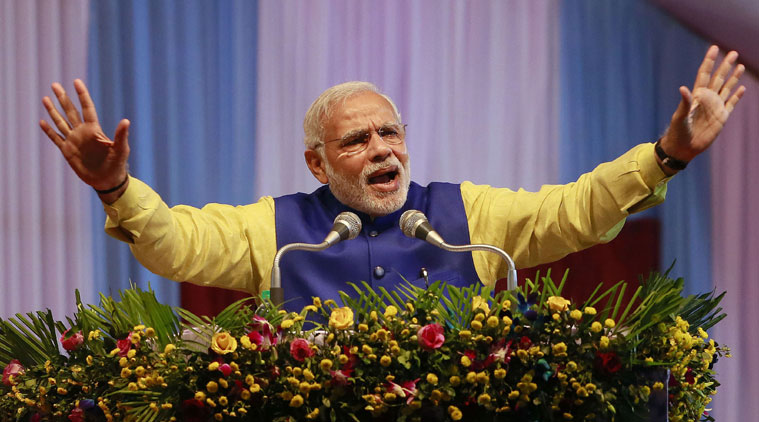 The euphoria that erupted following the victory of BJP in the recent Indian general elections and the appointment of Narendra Modi as the Prime Minister of India seems to be abating. The defeat of BJP in the Kashmir Valley elections is a potent indicator that BJP could suffer similar setbacks in the time to come.

The monumental backlash that has been witnessed from the Muslims and moderate Hindus alike on the move of forcibly converting the Muslims and the Christians to Hinduism is yet another devastating stunner that can whip up a gigantic upheaval to debase Modi and his party.

Narendra Modi is a Hindu Nationalist and a member of the Rashtriya Swayyamsevak Sangh (RSS). Since his election, the right wing hard-line groups Sangh Parivar (an umbrella of organizations), are aggressively championing the concept of Hindutva.

The Sangh Parivar comprises organizations such as the Rashtriya Swayyamsevak Sangh (RSS), Bharatiya Janata Party, Vishwa Hindu Parishad, Bajrang Dal and others. These right wing extremist groups have become overly active and are openly calling for the transformation of India into a Hindu nation state or Hindutva through conversions by force or enticements.

Modi remained the chief minister of Gujarat from October 2001 to May 2014. He should be given credit for various far reaching reforms that greatly streamlined the governance and markedly improved quality of life in that state. However the Gujarat riots of 2002 has blemished Modi and his party BJP for mass killings of the Muslims.

Despite India’s democratic and secular credentials, patently, she has the image of a Hindu state. Lately, a junior minister Sadhvi Niranjan Jyoti told a public rally in New Delhi that those who do not follow the Hindu god Ram were “bastards”. Ever since the ascension of BJG to power, several conversions have taken place forcing the Christians and the Muslims to Hinduism.

India suffers from a host of endemic problems that cannot be fixed so soon not even by Prime Minister Modi attributed to be an economic maverick. The most outstanding of these problems are colossally galloping population, high rate of corruption, poor and woefully inadequate and ramshackle socio-civic infrastructure. The other bottlenecks hampering rapid or sustained advancement of India are religious, racial and caste based deep and unbridgeable prejudices and discords.

There are other grave issue that by any measure cannot be fruitfully and expeditiously addressed by Modi in his term if office. Some of these are inadequate education facilities, environmental degradation, grinding poverty, woeful health conditions and the burgeoning crimes like rape, dowry deaths, and flurry of suicides, sexism and domestic violence.

The main reason behind the rampant poverty is the mushrooming population that of late stands at 1.27 billion. The pace of social and economic development remains far behind and out of sync with the scale at which the population is growing. Some 456 million people live below the international poverty line. Around 236 million make less than a paltry amount of Rs. 20 per day.

According to available statistics, the sanitation and public health are even worse in India than many of the African countries. It is reported that barring 31% of population utilizing reasonable sanitation facilities, the rest of the population, more-often-than-not, defecates in public or in rivers. It has been further estimated that every ten deaths in India is linked to the poor sanitation.

One of the odious curses in India is the debt bondage mostly practiced in the agricultural areas. The farmers take small loans from the rich cartels and individuals and keep paying interest on the loans that even exceeds 100% of the loan per year.

The economy of India cannot be adjudged as healthy or robust because India has one of the largest budget deficits in the developing world. Excluding subsidies it amounts to nearly 8% of its GDP.

India deems China as the real contender or a matching rival or model for economic development. China is now emerging as number one economy for its miraculous economic achievements even beating United States. But India, by any stretch of imagination, cannot reach even half way the economic miracle of China for very cogent reasons.

In China it is the one party system and the decisions made cannot be challenged by rival political parties. The decisions are implemented within the stipulated time. Moreover, China doesn’t have the level of corruption that one can see in developing nations like India and Pakistan. The projects and plans are completed in the given time frame under strict conditions of quality and durability.

India is possessed by a deep seated culture of corruption, poor infrastructure, paucity of funds; abominable caste culture, bureaucratic tangles and political bickering cannot attain the dizzying heights scaled by the Peoples’ Republic of China in economic, military social, health, education and other domains of human and social development.

In India another most daunting problem that keeps wrecking the atmosphere of internal social peace for a rapid and sustained multi-dimensional progress and rapid uplift, are scores of domestic insurgencies either for separation from the federation or attainment of autonomy. There are roughly 30 to 40 insurgencies that pose a constant threat to the unity of the federation of India. These cause human casualties on both sides and there seems to be no let up in their anti India activities.

The mighty Indian army remains busy in combating these insurgencies posing dire challenges to the territorial integrity of India at a huge cost of money and the hassle of deployments. Let us take stock of the three main insurgencies and how these are operating

For one, the Naxalite Maoist insurgency apace now for decades has entrenched itself into the rural terrain of Central Asia. In 2006 Prime Minister Manmohan Singh called the Naxalite insurgency as the “single biggest internal security challenge ever faced by our country” There is no respite in the casualties between the Indian army and the Naxalite rebels. The Naxalite operate in 60 districts in India with epicenter in Chhattisgarh. It claims to be supported by the poorest of the rural population.

In the part of Jammu and Kashmir valley under her control, India has kept a large chunk of army for decades now. The Indian controlled Kashmir erupts in periodic agitations and protests marches for liberation and against the grave human right violations perpetrated by the Indian security forces to suppress Kashmiris.

Reportedly, since 1989 in Indian occupied Kashmir more than 68,000 Kashmiris have been killed, maimed and disappeared. The Indian army also gets its portion of casualties at the hand of the rebels. A non-binding United Nations Security Council 47 adopted on April 21, 1948, calls for a plebiscite to decide the fate of Kashmir that India has been thwarting.

Similarly Sikhs may not forget the 1984 massacre in Golden Temple and then another one after the murder of the then prime minister Indira Gandhi the same year. The Sikh separation movements such as Akali Dal may have gone dormant after the huge crackdown that followed the assassination of Indira Gandhi. Nevertheless, the demand for Khalistan, a separate home land, for Sikhs is still alive.

Besides the internal insurgencies India has territorial disputes with all its neighbors i.e., China, Nepal, Pakistan, Bangladesh and Sri Lanka. These border disputes remain to be settled between India and all her neighbors. Over the disputed territory of Jammu and Kashmir, there have been three wars between India and Pakistan. Apart from Kashmir, both India and Pakistan have contentious claims over Sir Creek, Siachen Glacier and Kargil.

With China India fought a brief war in 1962. “The cause of the war was a dispute over the sovereignty of the widely separated Aksai Chin and Arunachal Pradesh border regions. In February this year, Modi warned China to drop its “territorial mindset” and said his “country’s weakness had encouraged China’s army to enter Indian Territory last year”.

The fundamental question is, that in the face of these colossal internal and external issues threats, would it be possible for Prime Minister Modi to move a magic wand and take India out of quagmire of poverty, hunger, civic mess, poor quality of life and usher her into the fold of developed nations.” It seems improbable during his five years term in the office. He may not even return to power in the next elections.

The writer is a senior journalist, former editor of Diplomatic Times and a former diplomat. He writes on his blog Upright Opinion.