Sydney (Tribune International, Labor Media Release, 25 July 2021); According to new data, the NSW Government decision to remove mobile speed camera warning signs has resulted in $4 million worth of fines issued in NSW for May alone, for low range speeding offences of less than 10km per hour – the highest on record. 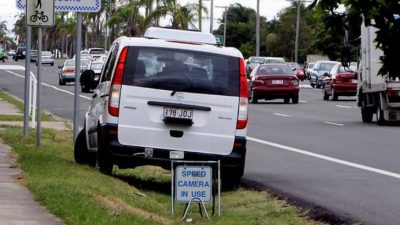 And as well as the removal of mobile speed camera warning signs, the NSW Government has deployed multi-directional secret cameras, that have now begun to operate for triple the time.

The NSW Government made the decision to remove warning signs from November 2020. They have now raised $20.2 million in revenue since January 2021 in speeding fines less than 10km/h.

NSW Labor is urging the Government to put an end to the secret cameras and the blatant cash grab, particularly when it is only essential workers on the roads right now.
“We all want our roads safer. But the lack of signage is only slugging people more at a time they can least afford it,” NSW Labor Leader Chris Minns said.

“In May alone the Government collected almost $4 million from over 25,000 extra fines compared to the same time last year.

“How is this an essential service? Sydney is in lockdown and we have the Government going out of its way to slug motorists on the road with low range speeding fines.

“The fact of the matter is people slow down when they see proper warning signs – and that makes our roads safe,” Mr Minns said.

Shadow Minister for Roads John Graham said these hidden speed cameras are doing nothing to slow people down and instead are slugging families who are already hurting financially.

“The numbers speak for themselves. The amount of fines issued shows the Government’s decision to remove warning signs have not slowed drivers down.

“If we are serious about making our roads safer and reducing speeding, then the NSW Government needs to reverse its decision to remove the warning signs, because we know warning signs are an important tool to slow people down.

“Warning signs display speed limits for drivers, which acts an alert to check speeds and slow down if they need to.

“Hidden mobile speed camera vehicles are not an essential service and clearly the data is showing they don’t slow drivers down and they don’t make our roads safer,” Mr Graham said.