An internationally renowned legendary Australian racehorse trainer James Bartholomew Cummings, OAM, passed away peacefully in his sleep at his homestead in north western Sydney. According to reports the well-known friend of people and horses died in the early hours of Sunday morning. surrounded by family, including his wife of 61 years, Valmae.
Cummings’ son Anthony was quoted as saying that ‘His final moments were spent with his family and wife of 61 years, Valmae, with whom he celebrated their anniversary on Friday. ‘Dad died peacefully in his sleep early this morning. At the time of his last minutes his family members were with him.

‘His final moments were spent with his family and wife of 61 years, Valmae, with whom he celebrated their anniversary on Friday. ‘For Bart, aged 87, this was a fitting end. A husband, father, grandfather and great-grandfather; a master trainer and a larger than life figure.
Cummings was arguably Australia’s greatest ever horse trainer, winning the Melbourne Cup 12 times. His distinguished career began when he was 23 and spanned over 64 years comprising of 7000 wins, including 12 Melbourne Cups, 760 stakes races, seven Caulfield Cups and five Cox plates. 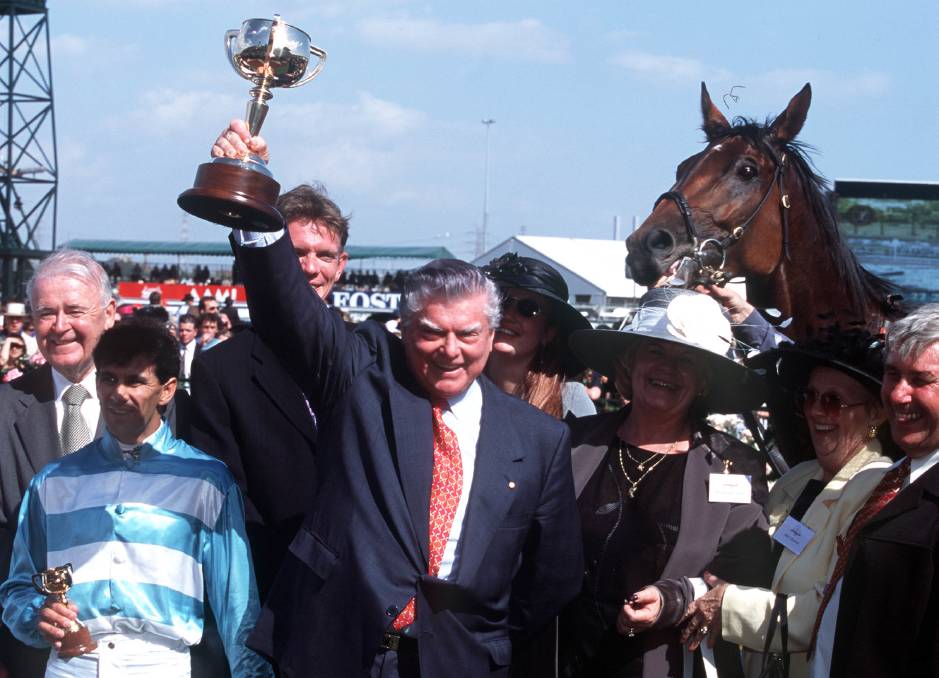 The ‘Cups King,’ was the first trainer in the British Commonwealth to train horses and jockeys that earned over $1 million. He was made a member of the Order of Australia in 1982 for his contribution to the racing industry and was inducted to the Racing Hall of Fame in 2001.  Heartfelt tributes for the fallen legend began to roll in on Sunday with the principal owner of Cummings’ well known horses, Dato Tan Chin Nam, calling Cummings’ his ‘great mate.’
Jockey Glen Boss penned a tribute to Cummings, saying every horse and jockey ‘improved’ in his company. ‘Every person every horse Bart spent time with improved. His understanding of the horse will never be matched. We will miss this amazing Man,’ he was quoted as saying.
Born James Bartholomew Cummings on November 14, 1927, he began training horses at age 26. In his illustrious career, he went on to train 12 Melbourne Cup winners, seven more than any other trainer. His last Melbourne Cup winner was Viewed in 2008, the victory coming on the 50th anniversary of the day when he entered his first Cup runner.
It is not only Australia, New Zealand and England but whole world will miss  Bartholomew Cummings. “We will miss your Bart”.