First Western journalist returns with chilling message: ISIS is ‘Much Stronger And Much More Dangerous’ than people realize’

German author Jürgen Todenhöfer, the first Western journalist in the world to be allowed extensive access to ISIS territories in Iraq and Syria has returned from the region. According to Todenhöfer ISIS is “much stronger and much more dangerous” than anyone in the West realizes. He completed his dangerous tour in 10 days, claiming that it was an astonishing and eye-opening journey. The author traveled deep into ISIS territory that is now known as their Islamic caliphate. He visited Mosul in Iraq , as well as Raqqa and Deir Ezzor in Syria.

Once within ISIS territory, Todenhöfer said his strongest impression was “that Isis is much stronger than we think here”. He said it now has “dimensions larger than the UK”, and is supported by “an almost ecstatic enthusiasm that I have never encountered in any other warzone”.

Iraq’s second largest city Mosul (some 400 km north of Baghdad) was taken by ISIS militants in a Blitzkrieg-like sweep in June, 2014. UK Defence Select Committee believes that “Mosul fell because the people living there were fed up with the sectarianism of the Shia dominated Iraqi government.”

Todenhöfer claims to have been able to move among ISIS fighters, observing their living conditions and equipment. He stated that, “Isis’s fighters themselves sleep in barracks formed from “the shells of bombed-out houses. They number around 5,000 in Mosul, and are spread so widely that were the US to bomb them all they would have to reduce the whole of Mosul to ruins”, he said.

The veteran German writer and journalist also managed to visit the Mosque there where the leader of ISIS, Abu Bakr al-Bagdadi, gave his only ever public address. He saw the realities of daily life under ISIS, with all shops having to close for prayers in the middle of the day. He explained during an interview with CNN, saying that, “there is an awful sense of normalcy in Mosul.”

130,000 Christians have been evicted from the city, the Shia have fled, many people have been murdered and yet the city is functioning and people actually like the stability that the Islamic State has brought them.

Nonetheless, he also says there is an air of fear among residents of course many of them are quite scared, because the punishment for breaking the Islamic State’s strict rules is very severe.

According to ISIS’s leadership, the group’s fighters managed to take Mosul with only about 300 men, even though more than 20,000 Iraqi army soldiers were stationed there when the attack was launched.

Todenhöfer spoke with several ISIS fighters who took part in the operation. A young fighter told him that, “It took us about four days to take Mosul.”

Todenhöfer asked, “So you were only about 300 men and you defeated 20,000 troops in four days?” he replied, “Well, we didn’t attack them all at once, we hit their front lines hard, also using suicide attacks. Then the others fled very quickly, the fighter explained. We fight for Allah, they fight for money and other things that they do not really believe in.”

In Mosul, Todenhöfer found an “almost ecstatic enthusiasm” for the jihadist group that is unlike anything he had seen “in any other war zone,” he tells the German press. Each day, Todenhöfer says, hundreds of new recruits arrive to pledge themselves to the group’s mission, or what he calls the “largest religious cleansing strategy that has ever been planned in human history.” Todenhöfer just could not believe the glow in their eyes. The new recruits felt like they were coming to a promised land, like they were fighting for the right thing.

Todenhöfer believes that these militants are not stupid people. He, added that, “one of the people we met had just finished his law degree, he had great job offers, but he turned them down to go and fight … We met fighters from Europe and the United States. One of them was from New Jersey. Can you imagine a man from New Jersey traveling to fight for the Islamic State?”

He went on to say that one of ISIS’s main points of strength is their fighters’ willingness — even their will — to die on the battlefield.

Todenhöfer met one somewhat overweight recruit in a safe house who said he wears a suicide belt to every battle because he is too chubby to run away if he is cornered and would choose to blow himself up, rather than be captured. 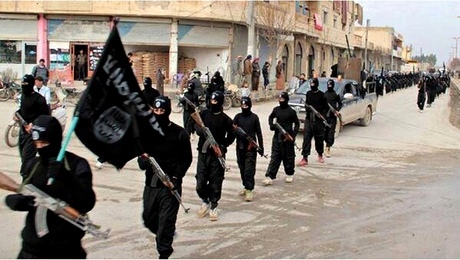 ISIS also has a track record of abusing, torturing and executing prisoners of war. Todenhöfer was briefly able to speak to a Kurdish captive while in Mosul. The captive claimed he had not been tortured, but Todenhöfer said he found that hard to believe.

This was a broken man, Todenhöfer said. It was very sad to see a person in this state. He was just very weak and very afraid of his captors.

Todenhöfer conducted the interview with the prisoner while several ISIS fighters stood guard. He asked the man whether he knew what would happen to him.

I do not know, the captive told him. My family does not even know I am still alive. I hope that maybe there will be some sort of prisoner exchange.

Todenhöfer was also taken to see child soldiers outfitted with Islamic State gear and brandishing AK-47s. One of the boys seemed very young but claimed he had already gone to battle for ISIS.

“How old are you?” Todenhöfer asked. I am 13 years old, the boy replied — though he looked even younger than that.

One of the most remarkable episodes of Todenhöfer’s trip to the ISIS – controlled region came when he was able to conduct an interview with a German fighter who spoke on behalf of ISIS’s leadership.

The man — clearly unapologetic about the group’s transgressions — vowed there was more to come; he also issued a warning to Europe and the United States.

Our expansion will be perpetual … And the Europeans need to know that when we come, it will not be in a nice way. It will be with our weapons. And those who do not convert to Islam or pay the Islamic tax will be killed.

Todenhöfer asked the fighter about their treatment of other religions, especially Shia Muslims.

“What about the 150 million Shia, what if they refuse to convert?” Todenhöfer asked. The fighter replied, “150 million, 200 million or 500 million, it does not matter to us, we will kill them all.”

The interview became testy when they reached the topic of beheadings and enslavement, especially of female captives.

Todenhöfer asked, “So do you seriously think that beheadings and enslavement actually signal progress for humanity?” the man said, “Slavery absolutely signals progress. Only ignorant people believe that there is no slavery among the Christians and the Jews. Of course there are woman who are forced into prostitution under the worst circumstances.” He continued, “I would say that slavery is a great help to us and we will continue to have slavery and beheadings, it is part of our religion… many slaves have converted to Islam and have then been freed.”

The ISIS spokesman blamed the beheading of captured Western journalists and aid workers on the policies of the United States.

People should really think about the case of James Foley, he said. He did not get killed because we started the battle. He got killed because of the ignorance of his government that did not give him any help.

The Future of ISIS

Even with recent gains by Kurdish forces against ISIS in Northern Iraq, Todenhöfer sees the extremist group as entrenched, building state institutions, and that it shows no sign of losing its grip in the main areas it controls in Iraq and Syria.

Todenhöfer thinks that the Islamic State is a lot more dangerous than Western leaders realize. He said, “They believe in what they are fighting for and are preparing the largest religious cleansing campaign the world has ever seen.”

Todenhöfer plans to use his first-hand experience of Isis in a book he is writing about the group. He says on Facebook that he has always “spoken to both sides” in his 50 years reporting from war zones, including interviews with Syria’s President Bashar al-Assad and al-Qaeda, with Afghanistan’s President Hamid Karzai and with leaders of the Taliban.

Todenhöfer claims that, Isis want to “conquer the world” and all who do not believe in the group’s interpretation of the Koran will be killed. The only other religions to be spared, Todenhöfer said, were the “people of the book” – Jews and Christians.

He believes that, ISIS will soon come to the West to negotiate a level of co-existence. “The only ones who could stop this now are the moderate Iraqi Sunnis,” he said, adding: “If you want to defeat an opponent, you must know him.”

He concluded with the remark that, “With every bomb that is dropped and hits a civilian, the number of terrorists increases.”