A century to David Warner, fifties from Steven Smith and Glenn Maxwell and a polished performance in the field have guided Australia to victory over Afghanistan

PERTH (Australia) – Australia posted a World Cup record total of 417-6 as they beat Afghanistan by 275 runs – the biggest winning margin in the tournament’s history.
David Warner hit 178 off 133 balls, Steve Smith scored 95 while Glenn Maxwell struck 88 in 39 deliveries in the Pool A encounter in Perth.
Afghanistan were then dismissed for 142, with Mitchell Johnson and Mitchell Starc taking six wickets between them.

Australia’s score surpassed the 413-5 India made against Bermuda in 2007.

It continues the pattern of bat dominating ball in this tournament as the third 400 plus score achieved in the pool stages, following South Africa’s 408-5 and 411-4 against West Indies and Ireland respectively.

The winning margin beats the 257-run amount by which India beat Bermuda in Port of Spain in 2007, which was equalled five days ago by South Africa in their victory over West Indies in Sydney.

Australia’s total is their second-highest score in a one-day international, after their 434-4 against South Africa in 2006.

The ODI record score remains the 443-9 made by Sri Lanka against Netherlands in 2006.

Afghanistan elected to bowl having won the toss, and removed opener Aaron Finch in the third over, but they were dominated thereafter.

Warner played the aggressor, ably assisted by the more conservative Smith, with the pair adding 260 – a record Australian partnership for any wicket in ODIs – before the former was caught at mid-on by Mohammad Nabi off the bowling of Shapoor Zadran in the 38th over, just seven runs short of Shane Watson’s record Australian ODI score of 185.

If Afghanistan thought this would bring them some respite they were wrong as Maxwell took over, hitting six fours and seven sixes in a brutal 39-ball innings, during which he scored 88, as Smith increased his own scoring rate to reach 95 before driving one straight to Najibullah Zadran off Shapoor with seven overs remaining. 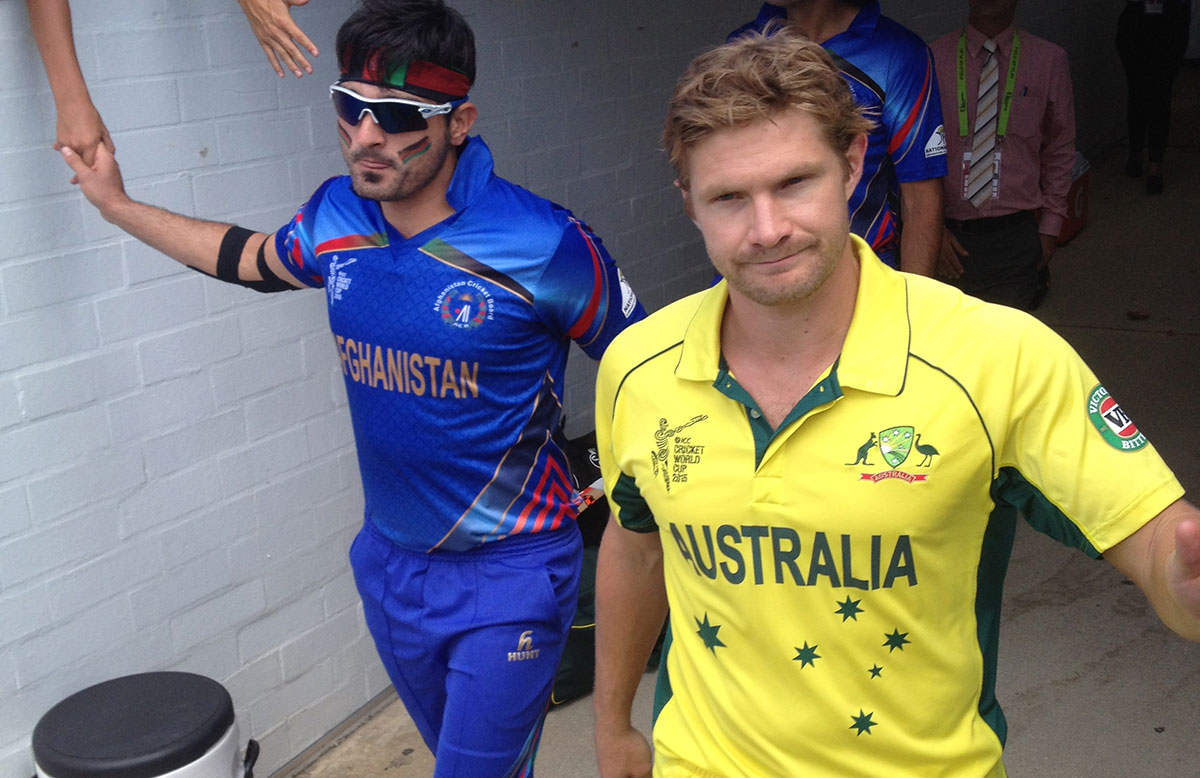 Despite the fall of three further wickets, returning captain Michael Clarke did not come out to bat, allowing James Faulkner (7), Mitchell Marsh (8) and Brad Haddin (20 not out) to help Australia to their record total.

As expected, Afghanistan were unable to cope with the Australian bowling attack, with their top order removed before they could reach three figures.

Johnson played a major role, having Usman Ghani, Nawroz Mangal, Asghar Stanikzai and Hamid Hassan all caught and Josh Hazlewood picked up two wickets, while Clarke unexpectedly got in on the act with a five-over spell of off-spin, during which he had Samiullah Shenwari caught by Johnson at short fine leg.

Starc – who almost salvaged a win against New Zealand in a dramatic encounter in Auckland four days ago – came to the fore later in the innings with two wickets to help seal the record win.

Australia captain Michael Clarke: “It was a very good win. The boys were outstanding with the bat. David Warner was excellent and the way the others played around him – Steve Smith, Glenn Maxwell – was unbelievable.

“The way we bowled set a good standard for ourselves. Overall, it was much improved from our display against New Zealand.

“I decided to send Max in ahead of me as we had a chance to break the World Cup record. I was thinking of coming in at four. I would liked to have batted for my own form but it was best for the team to make the decisions I did. I think it proved it was the right thing.”