Australia’s new Prime Minister, Malcolm Turnbull, has made a big shuffle in the Cabinet appointing as many as five women ministers sending fresh encouragements to the female population. Prime Minister Turnbull moved within a few days of his takeover and has veteran ministers replacing them with women and talented young MPs.

Prime Minister Turnbull’s decision included the appointment of Australia’s first female Defence Minister, Marise Payne, and a new Treasurer, Scott Morrison. The outgoing defence minister Kevin Andrews called the decision to sack him was disappointing and threatened the stability of Australia’s armed forces. However, the decision has been hailed by local and international observers and officials. 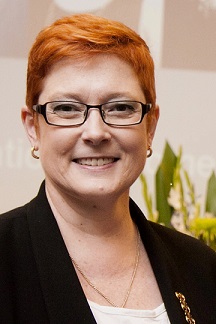 A news channel quoted John Blaxland, a senior fellow at the Strategic and Defence Studies Centre at the Australian National University (ANU), as saying that the appointment of Senator Payne was a positive development. “The culture of Defence has been a challenge over the years,” Dr Blaxland was quoted.

Meanwhile the Australian Defence Association has professed its confidence that incoming defence minister Marise Payne will bring stability to the portfolio. Too often Defence has been forced to take ministers who are in the twilight of their parliamentary career and they’ve only stayed very short periods and she’s the exact opposite of that, Neil James, Australian Defence Association was quoted as noting.

Outside parliament, Senator Payne continues to work in the community on issues as diverse as human rights, emerging technologies and the implications of our ageing population.

As member of the Liberal Party since 1982, Senator Payne was the National Young Liberal Movement’s first female President. She also served on the NSW Liberal State Executive for 10 years and at branch and electorate levels.

Having served as a political adviser to some of the most significant figures in Liberal politics of their time, Senator Payne went on to a career as a public affairs adviser in the finance industry.

In 1997 Senator Payne filled a casual vacancy to represent the people of New South Wales in the Australian Senate, making her inaugural speech on 2 September 1997. She was then elected in 2001, 2007 and 2013.