Angelina Jolie expanded on her humanitarian efforts in London, announcing the creation of the Centre on Women, Peace and Security at the London School of Economics.

Jolie, 39, a special envoy of the United Nations High Commission for Refugees, attended the event alongside William Hague, Britain’s First Secretary of State and leader of the House of Commons 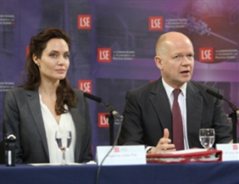 The new center will aim to educate students about the participation of women in “conflict-related processes” and “on enhancing accountability and ending impunity for rape and sexual violence in war,” according to a press release by London School of Economics.

“I am excited at the thought of all the students in years to come who will study in this new Centre,” Jolie said in a statement. “There is no stable future for a world in which crimes committed against women go unpunished. We need the next generation of educated youth with inquisitive minds and fresh energy, who are willing not only to sit in the classroom but to go out into the field and the courtrooms and to make a decisive difference.”

Amusha, a 58-year-old woman from Iraq’s Yazidi minority, last saw her daughter being driven away by militants of the Islamic State group. The fighters attacked Amusha’s village last year, killed the men and rounded up the women. “They brought buses and packed them with young, beautiful girls,” Amusha said of that day, adding that she believes her daughter was brought to the Islamic State’s headquarters in Syria and sold as a slave.

Amusha told her story in one of two new short films produced by Angelina Jolie, the actress and special envoy for the United Nations’ high commissioner for refugees. Jolie made the films during her visit to a Kurdish refugee camp in northern Iraq last month. They were published on The Guardian website to coincide with the opening of an academic center at the London School of Econonmics to combat violence against women in war zones.

Jolie’s documentaries tell the stories of some of the women captured by the Islamic State group as well as their families. They provide a devastating glimpse of the horror endured by over 2 million Iraqis who fled their homes during the onslaught.

Jolie’s second film tells the story of Sabreen, who was captured by the militants alongside her younger sister, Dilvian.

Sabreen said she still has nightmares about the torture she endured at the hands of the militants during four months in captivity in the group’s Syrian stronghold of Raqqa. Her young sister said she was forced to watch as the extremists tortured Sabreen. “I was crying and begging him to stop but he wouldn’t listen,” Dilvian said.

During her visit to the camp, Jolie urged the international community to do more to help those displaced by the conflict in Syria and Iraq.

“Many of these innocent people have been uprooted multiple times as they seek safety amidst shifting front lines,” she said. “The people I met today need to know that we will be with them.”