A shock diagnosis gave Elizabeth Duncan 55, the motivation she needed to turn her health around.

There was no history of diabetes in my family. It wasn’t on my radar at all. I’d been having symptoms for a few years, but I didn’t do anything about it. I’d like drink so much water because I was thirsty all the time, my feet were

swelling up. I actually thought I had gout, because I’d had a bad bout of that a few years before. But I had pins and needles, blurry vision, all that, but I never thought it might be diabetes. I knew a mate of mine had it, but it didn’t even cross my mind. I just thought it was getting older.

So, I went in to see the doctor thinking that it was gout, but I didn’t go back for the results. Instead, he rang me the next day. I was actually in the shower when he called, so my husband had to hold the phone to me. I heard him say it wasn’t gout and thought “Oh, beauty!” Then he told me it was diabetes and I didn’t know what to think. I didn’t really understand. But I went back to see the doctor and the dietitian and it started to make sense.

Because I didn’t have any family history, I knew what had caused the diabetes. I was a sugar addict. Lollies, chocolate. I loved all that. I wasn’t too bad with soft drinks, unless I was having scotch in them. But I had one last big yeehah – I ate pizza, I drank beer, I had everything I knew I wasn’t supposed to and then I went cold turkey.

I knew I had to go cold turkey because I know what I’m like. If I open a packet of chips, they’ll be gone in a flash. I 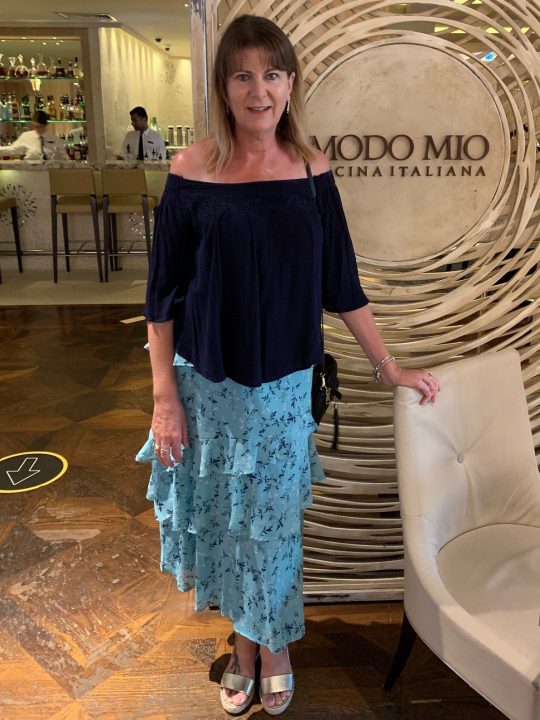 haven’t had even one chip all year, because I just know I wouldn’t be able to stop. I’ve been too scared to eat any chocolate in case I can’t stop. it was really, really hard. I’m lucky that my husband doesn’t have much of a sweet tooth, so he was able to support me. But I knew what I had to do. I knew I had to listen and do what my doctor and dietitian said, because they told was I was heading for a stroke or a heart attack.

I still go out for dinner with friends. I just tend to stick to a little bit of meat, things like pork belly bites without the sauce. I still have my social life and I still have my champagne!

I went to one of the DESMOND sessions run by Diabetes WA, which was really good. By that point, I had already learned a bit about carb counting from a book my nutritionist recommended. But it was great to learn more about exactly how sugar affects the body. And I liked meeting other people who were going through the same thing. Our facilitator had type one diabetes, so she was talking from experience, it was good to hear from people who had been there.

I could feel the difference changing my diet made very quickly. Within three months, my symptoms had disappeared. My hba1c dropped from 9 to 5.5. The biggest shock was my liver function, which was very high at 123, but I got that down to 58. And I was feeling better. When I went out dancing on the weekend, I noticed I could dance for longer and I wouldn’t get out of breath.

I’m definitely proud of myself. But I’m a little bit scared about what will happen when I’m totally off the medication. What if I did have a slip up and had a piece of garlic bread? I’ve probably only had two pieces in the whole of last year, but can I never have it? Can I treat myself with anything? I’ll have to be stricter. I’ll talk to my dietitian and see what she says. But I know what’s at risk. If I had have ignored that foot and walked out of the doctor’s surgery, again? My husband would be rich because I’m insured! But I don’t want that.

I go around now warning people. I tell off friends who have had symptoms but don’t get themselves checked out. I tell them – you don’t have to be massively overweight person to get diabetes. Have you got eye problems? Pins and needles? Do not ignore them. Get yourself checked out.