Younis Khan hit an eventful century and lifted Pakistan to a respectable 261-4 on the first day of the first Test against Sri Lanka. 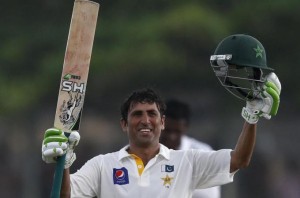 Khan showed no signs of rustiness after Pakistan playing a Test match for over six months and made a splendid 133 off 228 balls with 11 fours a six.

Fast-bowler Dhammika Prasad’s (2-54) twin strikes had Pakistan in early trouble at 56-3 before Khan dominated century stands with captain Misbah-ul-Haq (31) and Asad Shafiq, who was not out on 55 at stumps.

Khan twice used the DRS successfully and overturned umpire’s decisions in equaling countryman Mohammad Yousuf’s record of 24 Test centuries. He also got a lucky escape on 68 when Mahela Jayawardene, playing for the last time at Galle, dropped a sitter.

Prasad had removed Pakistan’s openers in quick succession as the visitors struggled in the morning session after Misbah won the toss and elected to bat under overcast conditions.

Prasad (2-33) claimed the wickets of Ahmed Shehzad and Khurram Manzoor cheaply in a lively opening spell and ace spinner Rangana Herath clean bowled Azhar Ali for 30 to have Pakistan in early trouble.

Earlier, Sri Lanka’s most accomplished batsman Jayawardene led the team onto the field with children giving him a guard of honor with raised bats and his team-mates clapping from the sidelines. Jayawardene will be playing his last Test at his favourite Galle International Stadium and will retire after the second Test at his home ground in Colombo.