LAHORE: Youngsters at Punjab Youth Festival has broken nine records for Guinness Book of World Records,Tribune International reported on Wednesday. Mohammad Arbab, Captain in Pakistan Army set the new world record after pushing 65 push-ups by one hand in a minute with 40 pound weight. Seven young Pakistani made new world record by controlling the heaviest weight with nails in a most layered bed of nails sandwich. Doing this, Pakistan grabs the world record from India. Expert of Martial Arts, Mohammad Rashid cracked 155 walnuts 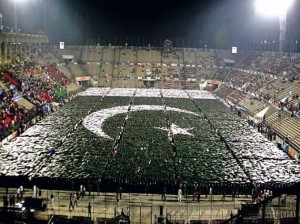 against the head in one minute breaking the world record hold by an American. Farhan Ayub set the world record by doing the most number of kip ups in break dance style in one minute. Nadeem Abbas made the new record by doing the most push-ups using back of hands carrying a 40lb pack in one minute. Mujtaba Hussain broke the world record of smashing the most walnuts with a nunchaku in one minute. He smashed 107 walnuts in a minute. Before this, a Chinese man have this record. Ali Haider doing 52 push-ups in a minute using the back of hands, carrying a 60 lb broke the record hold by a British citizen. Zafar Iqbal broke the world record, which was hold by a Lebanese citizen by doing 100 push-ups in one minute with a 40 lb weight at the back. The Punjab Sports Board plans to set 100 new Guinness World Records during the festival this year. Earlier, it has already set a world record of forming the biggest national human flag at the National Hockey Stadium last week. According to Punjab Sports Board the effort for breaking world record will remain continue while 2-member team of Guinness will monitor the activities of young guns at Punjab Youth Festival.