Yemenis are asking whether the president’s ‘divide-and-rule’ policy led to the ongoing standoff with Houthi rebels.

Sanaa, Yemen – Yemeni President Abd Rabbu Mansour Hadi is facing one of the biggest crises of his two-and-a-half year presidency as members of the country’s Houthi rebel movement have flooded into Sanaa, setting up protest camps in and around the capital and holding daily protest marches in the city’s centre. 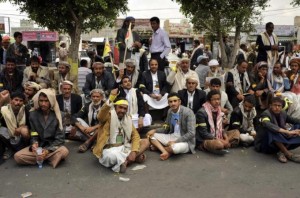 On September 9, as many as seven people were killed when Yemeni security forces opened fire on protesters gathered in front of the prime minister’s office, sparking fears that a declaration of war from the Houthis was imminent.

While many Yemenis are sympathetic to their embattled president who has tried to broker a compromise deal with the Houthis, many are also asking if the opposition group’s arrival in Sanaa was unavoidable, or the result of the president’s divide-and-rule tactics.

According to Adnan al-Odaini, a spokesman for al-Islah, Yemen’s main Islamist party, Hadi “has not been doing his job by upholding the law” against the Houthis.

Some Yemeni analysts cite other reasons. “He [the president] did not want to confront al-Islah party so he let the Houthis fight his battles for him, and now it has created a situation that is hard to handle,” said Nadia al-Sakaff, editor-in-chief of the Yemen Times, a local English-language newspaper.

“It is just like [former Yemeni President Ali Abdullah] Saleh, using different forces against each other to divide and conquer,” Sakaff told.

Abdelmalek al-Houthi, leader of the Houthi movement, which between 2004 and 2010 fought a stop-start civil war with the Saleh regime, has demanded that Hadi reverse a recent decision to cut fuel subsidies, and dissolve Yemen’s transitional government, which he said is corrupt and incompetent, replacing it with a cabinet of skilled technocrats.

He has also called on Hadi to review the makeup of the national council – officially called the National Authority – which was created in July to oversee the drafting of a new constitution, an integral part of Yemen’s ongoing political transition. The Houthis will leave Sanaa, al-Houthi has said, only when those demands have been met.

The government, meanwhile, said that the encampments on the city’s outskirts are populated by armed Houthi gunmen, and that the group has set up positions with heavy weapons including artillery and tanks north of the capital.

Hadi’s inaction on the Houthi issue, officials and observers say, is part of a wider disturbing pattern of behaviour which has seen the president concentrate decision-making inside the presidential office and place his own loyalists in key military and government posts.

“All government decisions go through Hadi, government appointments go through him, all the hiring and firing of government officials and civil servants,” says Nadia Abdullah, a youth activist and keen observer of Yemeni politics who played a prominent role in the dialogue conference. “I don’t think any president in the world has the power that he does now.”

Ali al-Bokhaiti, a spokesman for the Houthis, argues that part of the problem in reaching a deal with the government has been Hadi’s attempt to tighten his grip over key appointments. He has offered to reshuffle the cabinet, but has reserved the right to select the prime minister along with the ministers of finance, oil, defence and interior.

As Yemen’s vice president for the better part of 20 years, Hadi had lived in the shadow of his predecessor, and of Brigadier General Ali Mohsen al-Ahmar, who split from the Saleh regime during Yemen’s 2011 uprising, with his powerful First Armoured Division fighting openly with military units still loyal to the then-president.

When Hadi ascended to the presidency as the sole candidate in a February 2012 poll, analysts argued he did not have the political savvy, the tribal connections, or the loyalty of enough of Yemen’s divided military needed to bring the country’s rival political factions to heel.

With a bruising mandate of reforming the military, largely built around two opposing factions; rebuilding the moribund economy; and holding peace talks between Yemen’s many interest groups built into the Gulf Cooperation Council-backed deal that brought Hadi into power, the odds were stacked against him.

Two-and-a-half years later, the president has made significant inroads towards eroding Saleh’s power, gained control over some military units, initiated and brought the peace talks to a close, and has even managed to cut the fuel subsidy, the biggest economic reform introduced in Yemen in well over a decade. “Hadi did a remarkable job of consolidating power since ascending to power less than three years ago and, above all, managed to hold the country together,” said Adam Baron, a London-based Yemen analyst. But, he added, “The deepening fissures in the Yemeni state – to say nothing of the unclear roadmap for the country’s medium term future – underline the extent [to which] appraisals of the president’s time in power are nearly premature.”

In both the case of the cabinet reshuffle and the fuel subsidy cut, the final decision was made by Hadi and his closest confidantes rather than Mohammed Basindwah, the prime minister of Yemen’s “unity” government. Made up of a 50:50 split between the General People’s Congress, Yemen’s historical ruling party, and the Joint Meeting Parties, a coalition of opposition groups led by al-Islah party, the GPC and JMP have agreed on the policies in principle, but had blocked their actual implementation.

According to several government officials with close ties to the president, a limited number of people were informed of the July 30 fuel price hike so that “spoilers” – the term used in Yemen to describe the many political actors who are opposed to the country’s political transition – wouldn’t block its implementation. The state-run press, for example, did not announce the subsidy cut until after it was already implemented.

Among those said to have been surprised by the decision, according to government officials, was Basindwah, who had been caught similarly unaware when in June, Hadi announced the cabinet reshuffle that brought in a new finance minister, deputy finance minister and oil minister. The appointments ultimately allowed Hadi to push through the subsidy cut.

Since early 2012, military officers affiliated with Saleh have been replaced by people the president believes are loyal to him, often from Abyan, the southern province where he was born. More recently, Hadi has been switching his own people into senior positions previously occupied by officers close to Mohsen al-Ahmar, a conservative Islamist and al-Islah supporter who Hadi retained as a military adviser in 2012.

Fareas al-Muslimi, a Yemeni analyst and commentator, argued that Hadi built a similar level of control over decision-making at the National Dialogue Conference, a 10-month series of peace talks aimed at providing the basis for a new constitution.

Since the conference drew to a close in January, Muslimi told media that Hadi has also exerted an undue amount of influence over the committee that is drawing up the new constitution: Hadi was the chairman of the NDC, and is also chairing the new national council, designed to oversee the implementation of policies agreed on during the dialogue.

“The institutions and entities that were built out of the transition – the NDC, the [drafting committee], the [national council] – created to oversee the rest of the transition, on everything he is the chairman, he has the final word,” Muslimi said. “Everything has to go through Hadi.”

The Yemen Times’ Sakkaf, who is also vice-chair of the National Council, said that the body was largely toothless. “I am just an obligation to the government … I think it is a sham, it’s useless. I blame Hadi. He is the leader of the nation,” she said. She added: “He said he doesn’t know who to trust… [That] could be driving him to put his own people in various positions.”

For Muslimi, a major fear is that Hadi, having concentrated power around himself, may not want to hand it back quickly. “He is doing everything related to taking power from other stakeholders … but he is not doing anything to empower the people,” he said. “And that is not a good sign.”