Tens of thousands march in Sana’a after leader of Yemen’s Houthi rebels calls for the government to fall.

Sana’a, Yemen – Tens of thousands of supporters of Yemen’s Houthi movement have flooded Sana’a in a public display of strength the day after their leader publicly called for the government to be dissolved. 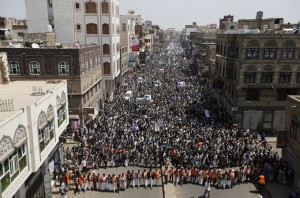 The group’s decision to protest in the Yemeni capital on Monday has raised concerns of a potential outbreak of violence between Shia Houthis and the government or its Sunni political rivals, the Islah party.

“We are here to overthrow the government,” said Masr al-Sharafi, a 30-year-old Houthi supporter from Sana’a. He is angry about “corruption” and “the huge increase in the fuel price” after the government slashed subsidies.

In a televised speech on August 17, Houthi leader Abdulmalek al-Houthi called for his supporters to mount protests in Sana’a and other major cities, and to reoccupy the Change Square protest encampment, an integral part of the country’s 2011 uprising.

The Houthis are a religious and social movement, also known as Ansarallah, that comprises an armed wing.

Al-Houthi demanded that fuel subsidies, which were cut significantly in late July, be reinstated. He urged for current government’s dissolution, in favour of what he considers a more representative cabinet. He gave President Abd Rabbu Mansour Hadi until Friday to meet the Houthis’ demands, or warned that “other steps” would be taken.

The Yemeni government has not officially commented on the protest, but a government official who spoke to Media on condition of anonymity, said: “They Houthis build a presence, provoke violence and react with violence.”

Ali al-Bokhaiti, a spokesman for the Houthis, disputed those claims. “[The protest] is aimed at meeting our goals, which are the goals of everyone in Yemen,” he told media. He said the protests would be peaceful.

Demonstrators arrived in Sana’a by bus from neighbouring provinces, and gathered at Change Square near Sana’a University, before marching in a loop around the city. Two new makeshift protest camps have been set up in the north and south of the city.

Between 10,000 and 100,000 people joined the demonstrations, according to organizers.

Not all of the protesters were affiliated with the Houthis. “I am here by myself,” said Amjid al-Iryani, 26. “I am not Houthi, but the government has found no solution to our problems. It does not do anything. It needs to change.”

Protesters chanted slogans against the government, as well as the United States and Israel.

The march was the most recent sign of the rising confidence – and popularity – of the Houthis. The movement has been involved in an ongoing conflict with the state for nearly a decade and played a role in the ouster of former President Ali Abdullah Saleh following the 2011 uprising.

Since then, the group has consolidated control over the northern provinces of Sa’dah and Amran, which borders the capital, while routing tribal and Islamist fighters loyal to Islah.

In July, the Houthis briefly seized Amran city, 50km north of Sana’a, killing the main military commander in the area who was widely seen as an Islah loyalist.

Some government officials worried that the Houthis could use a violent reaction from Islah members as an excuse to allow their fighters to enter the city.

Al-Bokhaiti, the Houthis spokesman, denied that the group had any plans to fight in the city, but said the Houthis have a right to defend themselves. “If there is an official attack by the government, of course we will defend ourselves,” he said. “But if there is some accident we will try to resolve it peacefully.”