At Fuji Kindergarten outside Tokyo, kids make the most of a magical environment designed just for them. The roof of their oval-shaped school, designed by Tokyo-based firm Tezuka Architects, is an endless playground, and trees grow right through classrooms.

So how do you build to let children be children? says Takaharu Tezuka (TED Talk: The best kindergarten you’ve ever seen): Think like a kid. He was inspired by his own daughter and son, now twelve and nine, who he says “have become a part of his body.” As they grew up, their habits and desires became his, and in designing his school with his wife, Yui, he only needed to channel them to know what to build. Explore the school and dive into Daddy and Mommy Tezuka’s kid-centered design thinking.

“We designed the school as a circle, with a kind of endless circulation. When we started, I had no preconceived notions. Studying other kindergartens was like looking in the rearview mirror of a car: Even if you look very closely, you can’t see anything in front.” 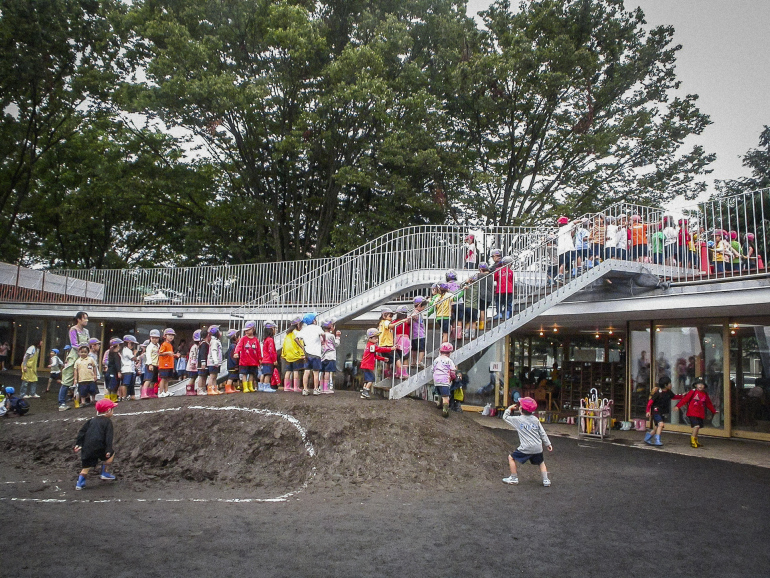 Kids can slide to class

“We put in a small mound of dirt at the bottom of the stairs leading from the roof — this was a trick to make the stairs shorter. But then the children started taking away the dirt to make mud bowls — 6oo kids take mud away, and the mound started to disappear! The school had to keep asking the construction company to put mud back. (As the soil got harder, the kids stopped taking it home.) See the slide? I knew kids love to slide, but I actually wasn’t very keen on putting it in, because it tells children what they should and shouldn’t do. Without tools, the kids have to think for themselves and create games. But in the end we kept it: We needed a fire escape.” 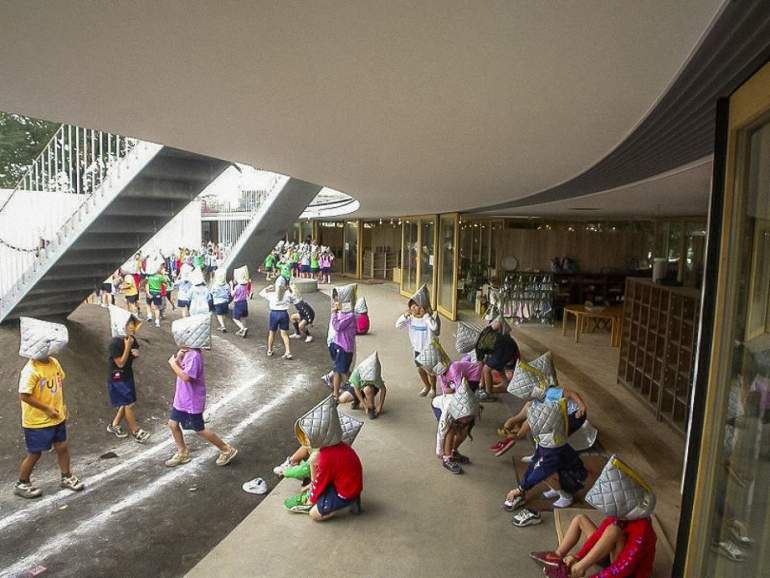 “Japan gets ten percent of the world’s big earthquakes, so children have these earthquake drills. They take these cotton hats from under the table to protect their heads in case something falls. It’s a very Japanese thing.” 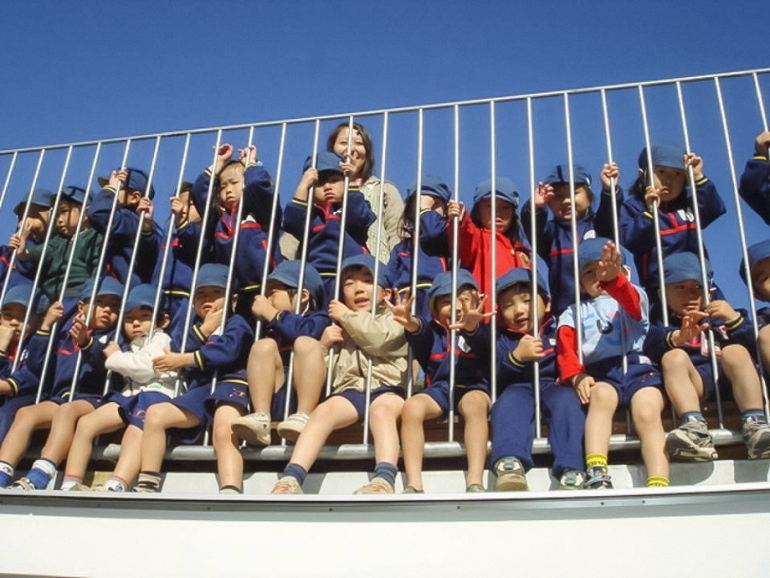 Being a non-human animal is encouraged

“Japanese building code says you have to have a vertical handrail with bars 100 millimeters apart so the kids can’t put their heads through. But: They can put their legs in, and kids love to swing their legs. Chimpanzees do the exact same thing — it’s a kind of instinct. And the way they do that is so cute.” 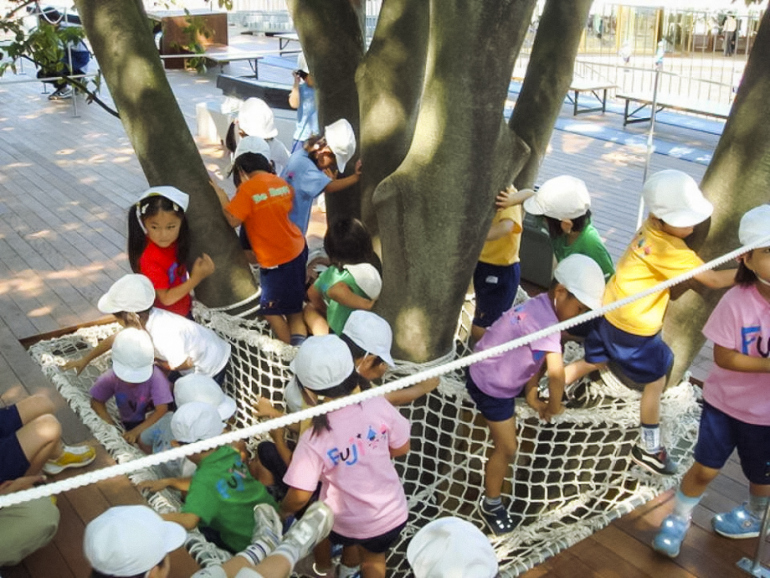 Anything can be a toy

“We had to build around the trees already there on the land. It wasn’t easy — we couldn’t cut the roots, which spread as wide as the tree crowns. We added these safety nets so the students wouldn’t fall through the holes around the trees. But I know kids, and they love to play with nets. Whenever they see a hammock, they want to jump into it, to shake it. These were really just an excuse for me to give the kids another way to play.” 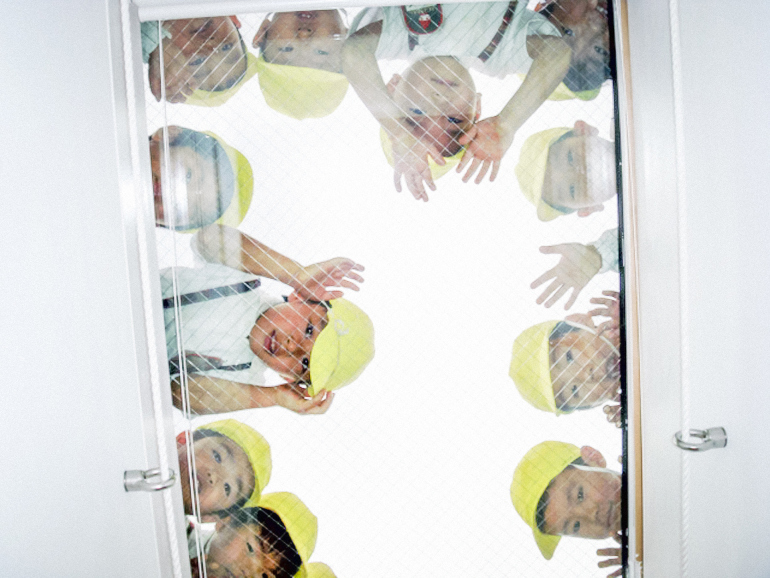 “The kids love to look through the skylights from the roof. ‘Where’s my friend?’ ‘What’s going on underneath in class?’ And when you look down, you always see kids looking up from below. Here, distraction is supposed to happen. There are no walls between classrooms, so noise floats freely from one class to the other, and from outside to inside. We consider noise very important. When you put children in a quiet box, some of them get really nervous.” 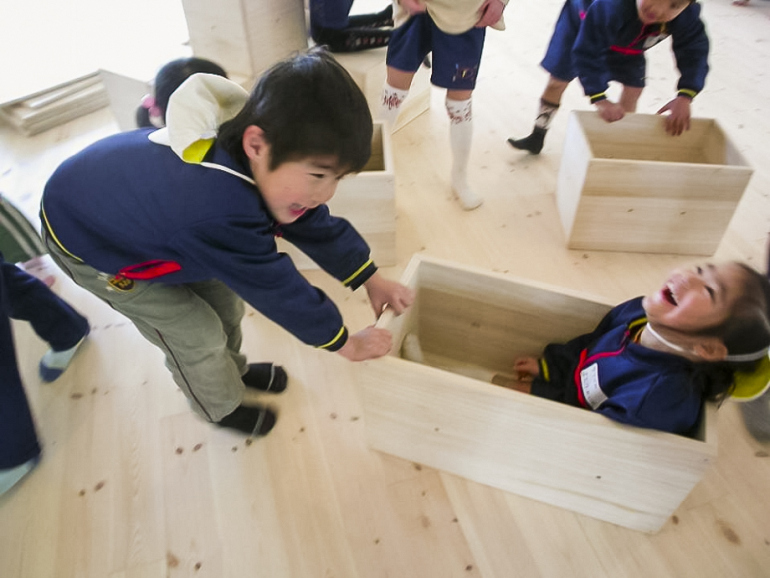 A chair can be a train

“Every month at Fuji the teachers and kids rearrange the classroom furniture. This little boy and girl were supposed to help make a new configuration, but they’re useless! They’re playing train instead. We filled the school with about 600 of these boxes, which are made from this very light wood known as kiri wood. It won’t hurt the kids if they hit their heads on the corner.” 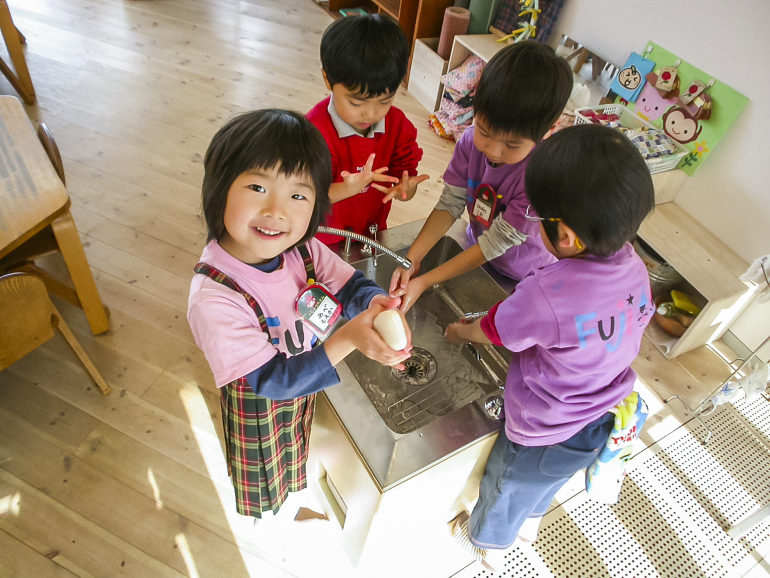 A place for water-cooler talk

“These days Japanese kids only talk to computers. I hate it. I thought, if we put a well in each classroom, they’ll be forced to talk to each other. There’s a phrase in Japanese, ido bata kaigi, which means, ‘conference around the well.’ Women used to meet and exchange information when they went to get water. I wanted the children to do the same.” 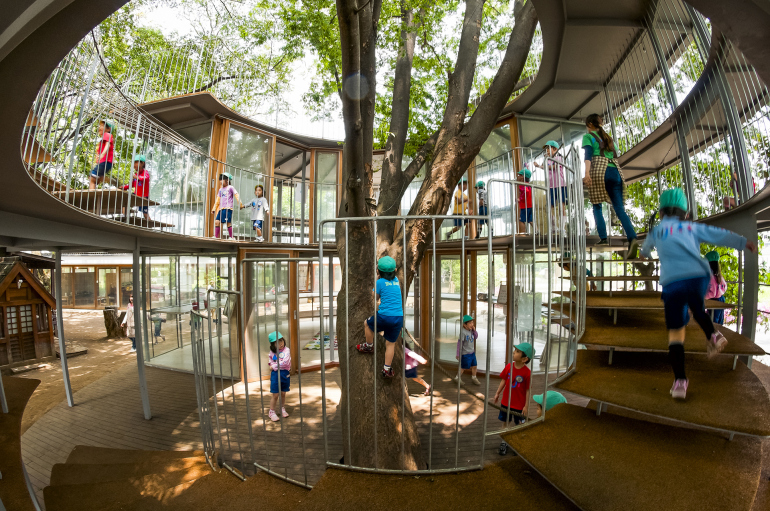 Kids can also climb to class

“In 2011, we built an annex to the school with two more classrooms and some playing areas. We called it ‘Ring around the Tree,’ because when the architect Peter Cook visited he said it reminded him of the song ‘Ring Around the Rosie.’ I thought the tree should be more important than the building, so I made the building as light as possible. In this school, children are encouraged to climb trees. If a kid is strong enough, they can reach the upper level without using the stairs. Other schools might not allow this, but the principal here believes children know their own limits. They stop when they have to stop.”

Photos courtesy of Tezuka Architects. Photo of the “Ring Around the Tree” building by Katsuhisa Kida/FOTOTECA.