VICTORIA’S Secret alum Alessandra Ambrosio and Gisele Bündchen will square off against former colleague Heidi Klum in a battle of the beauties as Brazil prepares to take on Germany in the World Cup. 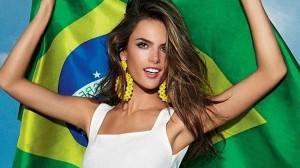 The 33-year-old Brazilian stunner has posed with her countries flag for a picture posted to Instagram.

“So excited for the game today,” she captioned the picture.

The supermodel has been posting a lot of images throughout Brazil’s World Cup campaign showing she is more than just a fair weather supporter.

The game will pit her against former Victoria’s Secret supermodel Heidi Klum who has been avidly and publicly supporting Germany on her Instagram account.

Brazil will have a bit of extra beauty in it’s corner however with Gisele Bündchen also supporting the side.

That puts the Victoria’s Secret battle of the babes at 2-1 in favour of Brazil.