Emergency aid aims to improve medical supplies and staff wages as Liberian healthcare system shuts down out of fear.

The World Bank has pledged $200m to help contain the deadly Ebola virus, with the growing crisis forcing healthcare system in Liberia to shut down out of fear of staff contracting the virus. 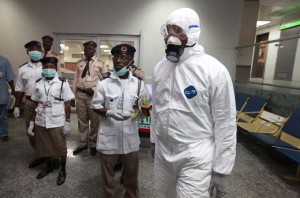 The World Bank said on Monday that it would provide up to $200m in emergency assistance to Guinea, Liberia, and Sierra Leone to help the West African nations contain the deadly outbreak which has killed 887 since the outbreak began in March this year.

Jim Yong Kim, World Bank president, himself an expert on infectious diseases, said he has been monitoring the spread of the virus and was “deeply saddened” at how it was contributing to the breakdown of “already weak health systems in the three countries”.

The funding will help provide medical supplies, pay healthcare staff, and take care of other priorities to contain the epidemic and try to prevent future outbreaks, the World Bank said.

The announcement came as health centers in Liberia’s capital city of Monrovia shut down because medical personnel became too afraid to turn up to work, the Associated Press news agency reported.

Both Liberia’s and Sierra Leone’s top Ebola doctors lost their lives to the disease after caring for numerous people.

Healthcare personnel in Liberia say they have not received sufficient support from the government to be able to deal with possible Ebola patients walking through their doors.

Liberian President Ellen Johnson-Sir leaf and ministers held a crisis meeting on Sunday to discuss a series of anti-Ebola measures as police contained infected communities in the northern Lofa county.

Tolbert Nyensuah, deputy health minister, said the government was doing its best to collect bodies as quickly as possible. He said that 30 bodies were buried over the weekend in a mass grave outside the city.

The government purchased land from a private citizen and that land will be used to bury the bodies, he said.

Nigeria’s health ministry announced on Monday that a doctor in Lagos who treated a Liberian victim had contracted the virus – the second confirmed case in the city, and the fourth case involving a doctor.

The US doctor infected with the virus, “seems to be improving”, the director of the Atlanta-based Centers for Disease Control, where he is being treated in an isolation unit, said on Sunday.

A second American infected with the virus while working in Liberia was flying back to the US on Tuesday.