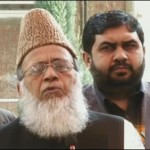 Talking to media here Thursday, Munawar Hassan said that no one openly invited the military to take over the country as Altaf Hussain has just asked.

He expressed regret over Altaf Hussain’s statment saying that democratic norms should be given a chance to move forward.

Hassan said the army is a responsible institution which he said would not pay heed to Altaf Hussain’s statement.