Australia cares about infrastructure investment in Asia. But why didn’t Australia joined the new China-led Asian Infrastructure Investment Bank (AIIB) last November when they would have received the most political benefit? And why are we still asking the wrong questions about the AIIB?

The Abbott Government made infrastructure investment a headline for the G20 Summit in Brisbane. A legacy outcome of the Summit was the establishment of a Global Infrastructure Hub in Sydney with a four-year mandate. Australia is now part of the troika for the upcoming G20 summits in Turkey and China, and it is clear infrastructure investment is a priority for all three nations, in particular for financing the New Silk Road.

So why on earth did we take so long to join the AIIB? There are three plausible reasons.

First, many of our closest allies and comparators have joined already, so we could shuffle in behind and avoid US censure. India and Singapore, then the UK and New Zealand, now France, Germany and Italy have all announced plans to join the AIIB. A ‘safety in numbers’ approach, then, which is disappointing in terms of Australian leadership.

Second, there were some legitimate concerns about bank governance.

Among infrastructure experts, bankers, economists, business groups, foreign policy experts and governance advisers, there is barely a word of dissent about the low risk and general reward of being involved in the AIIB at a strategic level. No Australian seems unduly concerned about China taking a stronger leadership role in economic governance. It is simply expected of the globe’s second-largest economy.

Nevertheless, the US was asking the right questions about safeguards and governance, even if for the wrong reasons. Infrastructure investment for macroeconomic growth does not automatically benefit people living in extreme poverty, as they can be affected by displacement, environmental damage or by being forced to pay more for basic services. But those attuned to human rights and social protection concerns in China felt that early accession might give more opportunity to push for the same level of environmental and social safeguards as have been hard-won in the World Bank and Asian Development Bank, but which need to go further. We do need to ask about AIIB plans for transparency, human rights standards, alleviation of extreme poverty, and climate change mitigation and adaptation in project selection and design.

Heaven knows, it is not that existing multilateral development banks have been so perfect in their interventions in our region all these decades. They have improved because they were forced to change by civil society actors. And the governance of those banks has not represented the reality of shifting power for about a decade. The US and Japan have only themselves to blame for that.

China should take the safeguards concerns on board, improve them where possible. In the AIIB, China’s global governance reputation will be on the line, and at the same moment China assumes the G20 presidency with the world watching.

Third, Australia put enormous diplomatic effort into its G20 year, and with the Infrastructure Hub in Sydney such an important legacy, we needed time to examine the synergies with the AIIB.

Asian Development Bank estimates suggest Asia will need $8 trillion in national infrastructure and $290 billion in regional infrastructure through 2020 to sustain the region’s growth trajectory. The AIIB in not a sufficient response to that deficit, but it is a response, and a creative one. In AIIB’s case, the consensus seems to be that the initial target is around $100 billion of new capital. The test is how that capital will be employed. Most development experts agree there is an underinvestment in pro-poor infrastructure globally. The International Energy Agency also estimated that adapting to and mitigating the effects of climate change over the next 40 years out to 2050 will require around US$45 trillion or around US$1 trillion a year. Will the AIIB invest in pro-poor, green infrastructure?

For the first time, China is not joining a global institution, it is creating one. The issue is not to stop China taking a leadership role in global economic governance. The issue is to do everything possible to make sure China benefits the rest of the world in its new role. 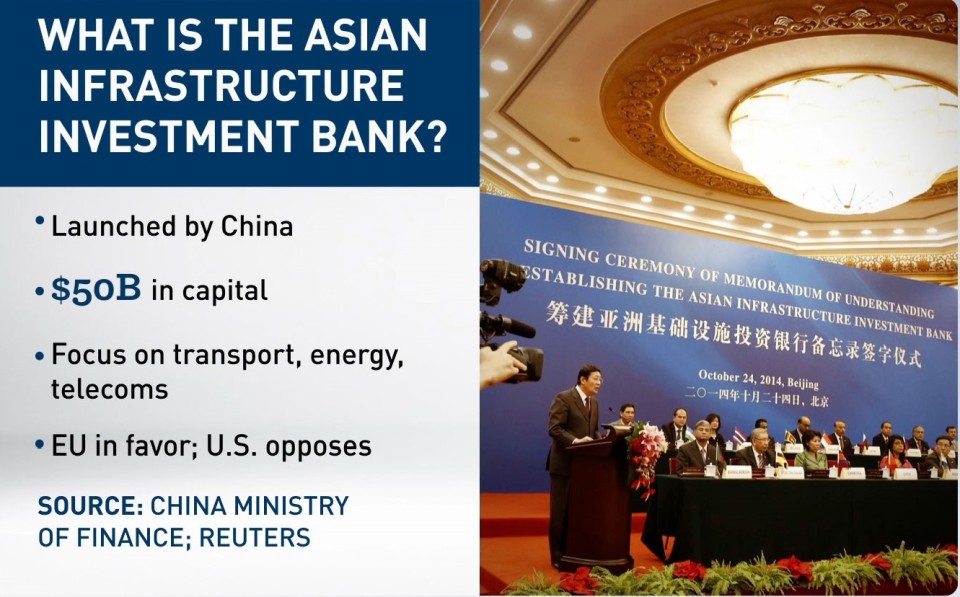 This article appeared in Mandarin in the Global Times, People’s Daily.