From Jinnah and Liaquat Ali Khan to Nawaz Sharif and Asif Ali Zardari, political leadership in Pakistan has traditionally been the dominion of the rich. Back then, Pakistan’s independence movement was led by the Muslim elite.

Today, another generation of very rich rule millions of impoverished souls, who have no hope of ever having any control over their destinies.

The Jinnah House (South Court) in the Malabar Hills neighbourhood of South Mumbai is in a dilapidated state today. However, the palatial home of Pakistan’s founding father is worth millions of dollars. Some estimate the property to be worth tens of millions of dollars. South Court was constructed in 1936 and cost 200,000 rupees. Architect Claude Batley had designed the structure, which was built with the help of Italian stonemasons.

Today, that opulence is matched by Zardari’s Surrey Palace (Rockwood Park) and the choice digs of the Sharif family in Raiwind.

The gulf between the elected and electors has plagued Pakistan since forever. Electoral democracy has hardly made any dent in the country’s dynastic politics.

For an egalitarian society to take root, the ruled must become the rulers of their destinies and governments.

This may change if Pakistanis were to learn from Uruguay’s President, José Mujica, who lives in a small house off a dirt road, and donates 90 per cent per cent of his $12,000 monthly salary to charity. Mr Mujica may be the world’s ‘poorest’ president, but he is also the president whose lifestyle resembles that of the people he leads. 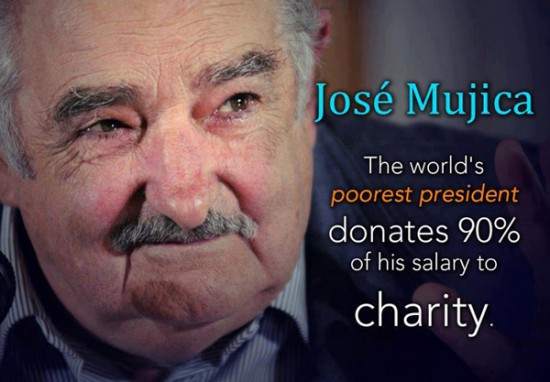 José Mujica has some things in common with the Zardaris of Pakistan. Mujica is a former ‘rebel’ leader who spent 14 years in prison and was shot six times. He was condemned to solitary confinement for most of the time in prison. Zardari, Makhdoom Amin Fahim, and Nawaz Sharif have all been to prison for varying time periods.

However, unlike Mujica, Pakistan’s ruling elite crave opulence and splendour while paying lip service to the plight of the poor they rule over.

Mujica was elected president in 2010. His prized possessions include an aging Volkswagen Beetle and a small house, which his political opponents disparagingly called a cave. When he was first elected, he arrived at the Parliament riding an old Vespa scooter. Two guards parked at some distance from his house are the only visible sign that Uruguay’s president lives there.

‘‘It is not the man who has too little, but the man who craves more, who is poor,’’ he told Simon Romero of the New York Times in 2013.

Since his election, Mr Mujica has undertaken several progressive reforms. Legalising the use of Marijuana and a greater recognition of and tolerance for sexual diversity are two examples of how he is transforming the society.

Speaking to The New York Times, Mujica criticised the extensive focus on economic growth, which he considers “a problem for our civilisation” because of growth’s adverse impact on earth’s resources.

Being in a prison for 14 years for his political beliefs has made Mujica appreciate the plight of those who have endured similar ordeals.

Earlier in December, Uruguay accepted six detainees from Guantánamo Bay. Mujica negotiated the release of four Syrians, one Tunisian, and a Palestinian who were cleared for release by the US authorities. However, the six detainees handed over to Uruguay, along with another 67 men still awaiting release, were kept at Guantánamo Bay because no nation was willing to accept them.

The US government is encouraging other Latin American countries to accept the remaining 67 of the 136 detainees at Guantánamo Bay who no longer pose any threat to the US. The Americans are dangling trade concessions to convince the struggling economies in Latin America to play host to strangers.

Mujica, however, welcomed the detainees on principle.

Uruguay, he says “would be hospitable to human beings that have endured an atrocious kidnapping.” He refuses to restrict the former detainees’ movements, against the wishes of the US government.

The 55-year old Canadian Prime Minister, Stephen Harper, is another example of an ordinary citizen rising through the ranks to reach the highest office in the country. While I oppose Mr Harper’s politics, I respect his struggle and the sociopolitical system that empowers citizens to become leaders. Harper, whose father was an accountant, attended public schools. He entered politics emerging later as the leader of the Conservative Party.

Prime Minister Jean Chrétien, who visited Pakistan in 1996, is another example of a little guy from a little town (le petit gars de Shawinigan) rising to assume the highest office in the land.

Given the stark socioeconomic differences, some may consider the Canadian examples to be irrelevant to Pakistan.

But Uruguay, on the other hand, is very much like Pakistan; a developing economy. With a population of just 3.5 million and per capita GDP of $16,500, Uruguay may not be an ideal match but still, it merits some curiosity.

If the status quo were to be maintained in Pakistan, Bilawal Bhutto Zardari, Maryam and Hamza Sharif, and other progenies of the ruling elite will take over control from their fathers and uncles. This will be no different from the past when the Mughals handed the reigns to their sons, condemning the indigenous of the subcontinent to a life of servitude.

José Mujica’s life shows that it is not the birthright of the elite to be rulers. Pakistani voters may want to emulate Uruguayans in the next elections.

Or is it too much to expect from Pakistanis to elect ordinary citizens to power?

The writer is a Toronto-based academic and the director of Regionomics.com