Sydney (Press Release): Sydney has been confirmed as the first city in the world to host the Rugby League World Cup 9s, with the inaugural tournament to be played at the new Western Sydney Stadium in 2019. 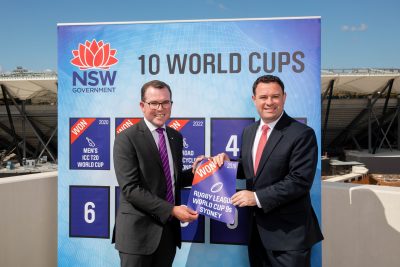 Minister for Tourism and Major Events Adam Marshall said the event, which would feature the best rugby league players from Australia and around the world, was an early victory for the NSW Government as it pursued its 10 World Cups in 10 years target.

“This will be one of the most popular and exciting tournaments on the international rugby league calendar and I am thrilled that the NSW Government has secured this event for our State,” Mr Marshall said.

“The Rugby League World Cup 9s is expected to attract more than 13,300 overnight visitors to Sydney, injecting approximately $11 million into the NSW economy.”

Minister for Sport and Western Sydney Stuart Ayres said the tournament would be the first World Cup to be held in the state-of-the-art Western Sydney Stadium, which is due to open by May 2019.

“We promised blockbuster events for Western Sydney Stadium and within six months of opening, it will host the inaugural Rugby League World Cup 9s.

“NSW is the home of rugby league in Australia and Western Sydney Stadium will provide the best sporting experience for fans anywhere in the country, making it the perfect location to host this event,” Mr Ayres said.

National Rugby League Chief Executive Officer Todd Greenberg said, “The Nines concept has been a great success and this is the obvious next step – Nines at international level. The best players in the world will be on show in this completely unique concept over the course of two days at the brand new Western Sydney Stadium.”

The Rugby League World Cup 9s will be held from 18-19 October 2019. Tickets will go on sale next year, with the waitlist at: https://www.nrl.com/waitlist/