Shane Watson looks set to remain at No.3 in the Test batting line-up after being endorsed by captain Michael Clarke on the eve of the South Africa tour.

Clarke hasn’t completely shut the door on reshuffling the order, but says Watson’s experience and leadership role have him in the box seat to stay in the crucial first drop position.

Watson scored a ton in Perth and averaged 38 during the home Ashes series, but importantly he failed to make his mark in the first innings of matches.

Shaun Marsh (fitness pending) and Alex Doolan are fighting to fill the batting spot made vacant by George Bailey’s axing and, given they’re both natural top order players, there’s a chance allrounder Watson could be moved down to No.6 for the first Test on February 12.

However, Clarke is aware of Watson’s desire to stay put and is set to back the former vice-captain to lead from the front against world No.1 South Africa in potentially bowler-friendly conditions. 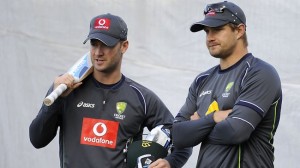 Australia won’t want to mess too much with the team that won the Ashes 5-0, and coming in at No.3 against Dale Steyn and co. would be a big ask for the untried Doolan and unproven Marsh.

Clarke said Watson had done a “pretty good job” at No.3, and believed his first innings failings were no more concerning than others in the top order.

“I know he wants to bat there, he loves that extra responsibility,” Clarke said before the team departed Sydney on Wednesday.

“I know we’ve got options in Alex Doolan and Shaun Marsh, they could both bat at 3 and have done in their careers for their states and Shaun has batted at No.3 for Australia.

“But I think Watto’s experience (puts him in front) and he’s played pretty well for us to be honest.

“I know he’s copped a little bit of criticism that he hasn’t made as many runs as he would have liked in the first innings, but who has? We’d all like a few more runs that’s for sure.

“Right now I’m backing Watto to have a fantastic series and lead by example. He’s played a lot of cricket and he’s a senior member of our team and No.3 is an important role.”