LAHORE: Former captain and fast bowler Waqar Younis has been named as the new head coach by the Pakistan Cricket Board (PCB), the board announced on Tuesday.

The appointment of Younis, who has been given a two-year co 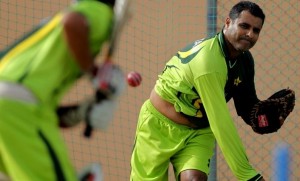 ntract, comes merely days after Sethi’s interview to a local newspaper in which he hinted that a deal between the two parties was all but done.

“I put the matter before our managing committee and they chose the option led by Moin Khan which [Wasim] Akram had listed at number one. Not everyone was happy with the decision, but we let it go because there was no time to constitute a new committee and come up with different choices,” Sethi said in that interview.

“It was never a Moin or Waqar option for us as formulated by Akram. The new formula has both former players in a format that we think will produce better results. That’s why I have now given them two-year contracts like [Dav] Whatmore earlier,” he added.

Waqar, who has coached Pakistan in 2010 and 2011, before resigning for ‘personal’ reasons during Ijaz Butt’s tenure at the helm of the cricket board, had again expressed his willingness for the post after his previous application was rejected in early February by a PCB coach-finding committee.

Moin Khan was named the chief selector-cum-team manager by Najam Sethi-led-Pakistan Cricket Board (PCB), following which Waqar had emerged as the strongest contender for the post of head coach.

The former paceman had met with PCB chief Najam Sethi and expressed his availability for the position.

He had also clarified he had no differences with Moin or any other player in the national cricket team.

“As I am in Lahore I just met the PCB chairman to express my availability as head coach for the Pakistan team, for which I have already submitted an application,” said Waqar.

“And I would like to express that I have no differences with Moin Khan or any player,” he added.