Confession: I have 140 unlistened-to-voice-mail messages on my cellphone. They stretch from the present day all the way back to Oct 15, 2012 (my mother, 26 seconds. Sorry, Mom! Hope it wasn’t urgent!).

I really should listen to them. Odds are that between October 2012 and now, one of these messages was important. It’s just that I live by the Millennial Code, which can be summarised in the phrase: “If it mattered, he’d have texted.” 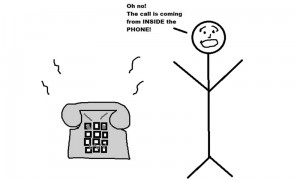 The New York Times has picked up on this trend and wrote about it last week. Among the facts it cited: Voicemails among the general population are down by eight per cent from October to April, and overall, everyone sends something like 60 texts per day instead, and nobody makes landline calls anymore.

But I don’t think this is a terrible development. A phone is not for making calls. Phones are devices that you use to avoid talking to people, and anyone who thinks otherwise is surely older than 30.

Look at your smartphone. This slim, elegant screen can transport you instantly to the internet, show you videos, allow you to play complex and time-wasting games, send detailed emails and even provide you with robotic companionship. Why on earth would you waste all this bounty on a phone call?

Phone calls are terrible. Either the other party picks up, in which case you have to spend several minutes completely forgetting what it was you had to tell him or her, pausing to allow the other person to speak, then speaking over each other, then pausing, then discovering that you are totally unable to get out of the conversation.

Phone calls are also slow. Whenever I get a call instead of a text, I heave the same silent sigh I heave when I click on what appears to be a news story and it turns out to be a video instead. “I could have gotten this information SO MUCH FASTER,” I murmur to myself.

With texts, you can pretend that something important is preventing you from responding instantly. But the instant you pick up the phone, you have to admit that the Action-Packed Afternoon you had imagined you were having actually consists of walking in slow circles around your apartment to avoid laundry.

The only time a phone call is merited is when you are on your way to meeting someone and have arrived at the place and time where you texted one another you would be, and the other person does not appear to be there. Then you call to make sure you’re standing on the correct side of the plant.

Apart from that, the only people who still use their smartphones to place calls to live humans are our parents, who use them to call our grandparents’ landlines.

To be frank, a phone is just something I carry around so that if I ever wonder about anything, I can answer my question immediately without having to talk to a person. That is what it is best for: avoiding human contact. At the dinner table, it is what I look at instead of my family. On the bus, it is what I gaze intently at instead of the human beings around me. People on the subway who use their phones to make calls are frowned upon, subtweeted at and shunned.

I even take it to the restroom with me, just so I can have something sensational to read. But I wouldn’t make a call there! Not just because it’s the restroom but because the phone has evolved, “Her”-style, far beyond its original intent.

It wasn’t always this way. I used to be notorious for leaving voicemails. Voicemails are all the fun of having a captive audience for your remarks combined with knowing that that audience may very well never hear what you have to say. It is like whispering a message into a bottle, then floating the bottle off into the ocean.

But some people, according to the Times, are now taking etiquette classes specifically to learn how to leave a good voicemail. You might as well learn how to joust or become a master of the lute. Don’t bother! No one will ever listen.