US official says any Russian intervention under the guise of providing humanitarian aid will be viewed as invasion.

The United States has warned Russia against using the humanitarian crisis in eastern Ukraine as a pretext for an invasion, saying such a move would be “completely unacceptable”. 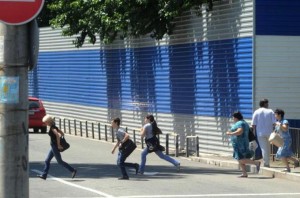 The warning came after Russia proposed setting up humanitarian corridors to come to the aid of civilians in east Ukraine who are fleeing violence as Kiev’s forces battle to retake the eastern city of Donetsk.

US Ambassador Samantha Power told the UN Security Council on Friday that international aid agencies were on the ground and helping civilians trapped between pro-Moscow rebels and Ukrainian forces.

“Any further unilateral intervention by Russia in Ukrainian territory, including one under the guise of providing humanitarian aid, would be completely unacceptable and deeply alarming and would be viewed as an invasion of Ukraine,” Washington’s envoy said.

Moscow proposed that the convoys of aid be organized through the International Committee of the Red Cross, but it was unclear how much of a role the ICRC would play in the deliveries.

“Urgent humanitarian assistance should be delivered by the international organizations that have the expertise, experience and independence to provide it. It should not be delivered by Russia,” Power said.

With fighting intensifying near Donetsk, more civilians are fleeing while those left behind struggle to find water, medical care and other essentials.

The United Nations is ready to boost its support to Ukrainian relief efforts, Secretary-General Ban Ki-moon said in a statement.

“If there is further deterioration of the humanitarian situation, or if nationally-led response efforts are not sufficient to meet humanitarian needs, the UN is ready to consider additional measures of support,” said the UN chief.

He added: “At this stage, the situation is being handled appropriately by the government of Ukraine, in coordination with international partners.”

Four months of fighting in east Ukraine have left at least 1,300 people dead and driven 285,000 from their homes in a conflict that also brought East-West relations to their lowest point since the end of the Cold War.