The United States has accused the Chinese military of provocation after one of its fighter jets conducted an “intercept” of a US Navy spy plane in international air space over the South China Sea. 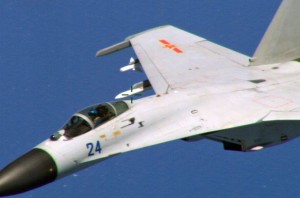 The Obama administration condemned the latest incident, with Deputy National Security Adviser Ben Rhodes saying on Friday that it was a “deeply concerning provocation”.

“What we have encouraged is constructive military-to-military ties with China and this type of action … clearly violates the spirit of that engagement, and we have made our concerns known directly to Beijing,” he said.

Rear Admiral John Kirby, the US defense press secretary, said that a Chinese fighter pilot performed acrobatic maneuvers around the Navy patrol plane, and flew a few meters from the US jet.

Kirby said the US lodged a formal diplomatic protest with Beijing over the incident, which took place on Tuesday about 215km east of Hainan Island, site of a sensitive Chinese submarine base.

Kirby said the Chinese fighter jet made several passes at the P-8 Poseidon anti-submarine and reconnaissance plane, crossing over and under it. At one point, the jet flew wingtip-to-wingtip about 9 meters) from the Poseidon, then performed a barrel roll over the top of it, he said.

“The Chinese jet also passed the nose of the P-8 at 90 degrees with its belly toward the P-8 Poseidon, we believe to make a point of showing its weapons load,” Kirby said.

The US Navy’s P-8 Poseidon aircraft are designed for long-range missions including intelligence collection and reconnaissance.

“This kind of behavior not only is unprofessional, it’s unsafe,” he said. “And it is certainly not in keeping with the kind of military-to-military … relations that we’d like to have with China.”

The United States and China have differing views about the legality of US military overflights in much of the region as a result of China’s broad territorial claims and differing interpretations of rights conveyed under the Law of the Sea treaty.

In April 2001, a similar aggressive intercept of US EP-3E spy plane by a Chinese F-8 fighter in the same area resulted in a collision that killed the Chinese pilot and forced the American plane to make an emergency landing at a base on Hainan.

The 24 US air crew members were held for 11 days until Washington apologized for the incident, which soured US-Chinese relations in the early days of President George W Bush’s first administration.

The US and Chinese militaries have boosted their contacts in recent years amid recognition that as China’s economic interests continue to expand it will play a bigger security role in the world and have more interactions with the US military.

Chinese ships recently participated for the first time in the US-sponsored Rim of the Pacific naval exercises, the world’s largest. US officials said they hope the increasing contacts will help avoid misunderstandings as they operate in closer proximity to each other.

But even as US and Chinese military contacts have expanded, tensions between China and its neighbors, some of them US treaty allies, have heightened over competing territorial claims in the South China and East China seas.