The US container ship Cape Ray has started to neutralise chemical materials that were once part of Syrian President Bashar al-Assad’s weapons arsenal, the US Defence Department has said. 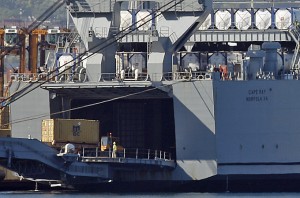 The ship, located in international waters in the Mediterranean Sea, began processing about 600 metric tonnes of chemical weapons and the raw materials that could be used in them, Pentagon spokesman Colonel Steve Warren said on Monday,

The US government has said the materials include mustard gas and components for the nerve agent sarin.

The materials were transferred to the Cape Ray earlier in July from a vessel that brought them out of Syria, the Reuters news agency reported.

Assad agreed last year to turn over his chemical weapons stockpile as part of a disarmament deal.

Warren said it is expected that the ship will need 60 days to process the materials.

The Cape Ray is equipped with a hydrolysis system that uses substances like water, sodium hydroxide and sodium hypochlorite to make chemical warfare agents safe enough to be disposed of at commercial sites.

Warren said the processed material would be transferred to Finland and Germany.

Washington and Moscow supported the agreement under which Assad surrendered Syria’s chemical weapons after Damascus was accused of using them against civilians.