Washington DC – United States and Sri Lanka, in a recent meeting, have discussed progress on trade and investment issues to foster economic growth and provide a strong foundation for greater economic cooperation and stronger bilateral relations. Two-way trade between the both countries has now reached USD 3 billion. 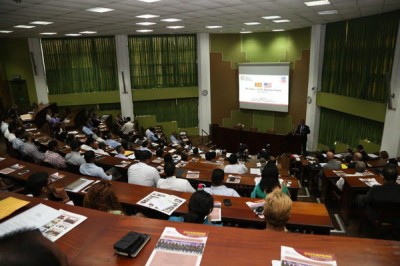 Senior officials of the Governments of the United States and Sri Lanka met recently in Colombo to continue dialogue on trade and investment issues and for evaluating the progress under the Trade and Investment Framework Agreement (TIFA) between the two countries. A wide range of issued were discussed at the meeting including market access, the U.S. Generalized System of Preferences (GSP), labor, trade promotion efforts, intellectual property rights, agriculture, and sector-specific investment challenges.

The U.S.-Sri Lanka TIFA, signed in 2002, is the primary forum for bilateral trade and investment discussions between the two countries. The TIFA process has been the focal point of a sustained and multi-faceted high-level engagement between the United States and Sri Lanka on trade and investment issues. Delivering the inaugural Address at the 11th Joint Council Meeting of the Trade and Investment Framework Agreement (TIFA) in Colombo, Minister of Industry and Commerce, Rishad Bathiudeen noted that due to the visionary leadership of President Mahinda Rajapaksa, Sri Lanka is now on a journey to achieve upper middle income country status in the near future. 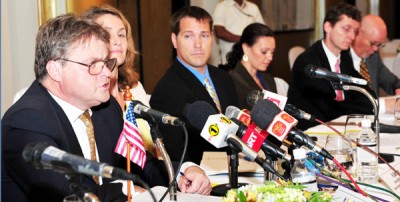 The TIFA process encourages public and private sector dialogue, facilitates Private-Public Partnership discussions as well as business opportunities events being held simultaneously with TIFA official meetings. In this context, U.S.-Sri Lanka Business Forum was held under the patronage of the Ministry of Industry and Commerce, hosted by the AmCham (America Chamber of Commerce), Colombo and the Ceylon Chamber of Commerce at the CCC Auditorium followed by business meetings with visiting US business delegates.

Addressing the Forum, Ambassador Prasad Kariyawasam, Sri Lankan Envoy to United States, said that being the most liberalized nation in South Asia, World Bank has rated Sri Lanka as the best for business in the region. TIFA provides an important platform for Sri Lanka to address remaining challengers to get to the next level in economic development.

Head of the U.S. delegation, Assistant United States Trade Representative for Central and South Asia, Michael Delaney said that United States is the largest “customer” of Sri Lanka, with U.S. importing $2.5 billion worth of Sri Lankan products ranging from apparel, precious stones, rubber, spices, and tea. However, the trade and investment relationship between the two countries is still “far below potential” and there is a need for pragmatically “review all of the specific problems traders and investors are experiencing, with an eye toward easing barriers, and grow trade and investment to create more jobs”.

Anura Siriwardena, Secretary of the Ministry of Industry and Commerce delivered the keynote address and Suresh Shah, President of the Ceylon Chamber of Commerce and Andrew Mann, Charge d’ Affairs of the US Embassy in Colombo also addressed the gathering.

Assistant USTR Delaney delivered a public lecture on “Role of Economic Development in Fostering Solidarity” at the Lakshman Kadirgamar Institute of International Relations and Strategic Studies. Later, he joined Industry and Commerce Minister Bathiudeen for the ceremonial launch of “Sri Lanka Peace Collection” handloom products designed by War Widows in Sri Lanka, a project assisted by the US Government.