Sydney (Tribune International 16 Dec 2014): Martin Place – a place that endured much despair and terror only yesterday during the Lindt cafe siege was transformed today into a place teeming with the spirit of solidarity, resilience and love as mourners pay their respects with flowers. Hundreds of Australians, united in grief, paid floral tributes to the victims of Sydney’s 16-hour siege crisis, creating a carpet of flowers at Sydney’s Martin Place. 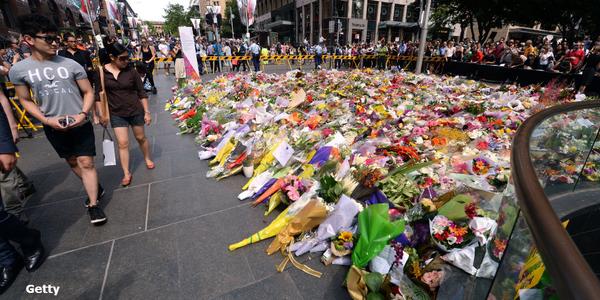 Mr. Abbott visited the memorial and signed the condolence book with his wife Margaret. “Every Sydneysider can feel quietly proud of the way this city has handled one of the most difficult 36 hours in our history,” said Mr Abbott in a press conference, adding that Australian nation had been thoroughly impressed with the police operation and thanked Sydney for its response to the tragedy.

“Australia will always be a free and open and generous society” he stated.

Touching scenes were witnessed at the site of the siege, as mourners hugged and comforted each other in front of hundreds of floral tributes to the hostages who lost their lives. 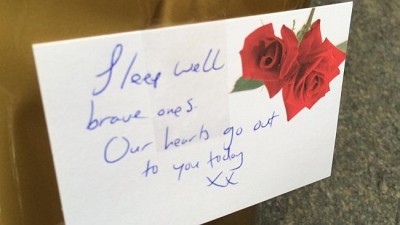 “Sleep well brave ones. Our hearts go out to you today,” read one of the thousands of messages that accompanied bouquets of flowers.

Australia’s communications minister Malcolm Turnbull, urged Australians not to be “corrupted by hatred”, according to Sydney Morning Herald reports. Speaking after attending the mass for the victims at St Mary’s Cathedral, Turnball said: today’s service was so beautiful. “Because it was all about love. It was about that love, that love of God … the loving example of Jesus that should inspire us all not to be corrupted by hatred and violence, and to remain united as Australians, now and forever.”

The Mayor Sydney, Clover Moore praised the bravery of the police officers involved and the way they handled the siege. “I think the police acted incredibly bravely … they must have had a terrifying time too. The whole incident was managed calmly and professionally. And it was only when a shot was fired, and that’s when we think Tori Johnson might have been shot, that the police moved in … We think our police are very brave and we have a lot of respect and appreciation for them” the Mayor said speaking to Sky News.

Australian Muslim groups and NSW’s Islamic community issued a statement expressing their “utter shock and horror at the unprecedented scenes” from Martin Place and condemn Sydney Siege. “We reject any attempt to take the innocent life of any human being, or to instill fear and terror into their hearts” read the statement. “This is a time for all Australians to stand together and support each other” the statement said.

A group of five Muslims expressed grief while placing flowers at the Memorial. One of them was Silma Ihram of the Australian Muslim Woman’s Association. “As Australian Muslim’s we share the grief and the suffering,” said Silma. “We are effected like everybody else. Our thoughts are with the families of those (who died).” She called on the Australian community to stand together and hailed the ‘I’ll ride with you’ campaign on Twitter.

A mass was also held today in memory of the siege victims at St Mary’s Cathedral which is about 500 metres from the Lindt Chocolat Cafe in Martin Place where the hostages were held.

Sydney is slowly returning back to normal after police brought an end to a 16-hour siege in a Martin Place cafe in the early hours of Tuesday morning. Two hostages, Lindt Cafe manager Tori Johnson, 34, and Sydney barrister Katrina Dawson, 38, were killed in the final minutes of the siege, along with gunman, Man Haron Monis, himself. Six were hospitalised; three with gunshot wounds.