Governments unprepared to protect the poor and vulnerable, says IPCC 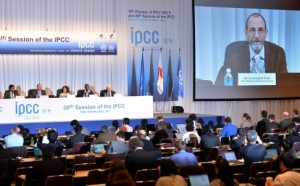 Climate change has already cut into global food supply and is fuelling wars and natural disasters, but governments are unprepared to protect those most at risk, according to a report from the UN’s climate science panel.

The report is the first update in seven years from the UN’s international panel of experts, which is charged with producing the definitive account of climate change.

In that time climate change has ceased to be a distant threat and made an impact much closer to home, the report’s authors say. “It’s about people now,”said Virginia Burkett, the chief scientist for global change at the US geological survey and one of the report’s authors.

The scientists of the Intergovernmental Panel on Climate Change found evidence of climate change far beyond thawing Arctic permafrost and crumbling coral reefs – “on all continents and across the oceans”.

The scientists said there was enough evidence to say for certain that climate change is affecting food production on land and sea.

The rate of increase in crop yields is slowing – especially in wheat – raising doubts whether food production will keep up with the demand of a growing population. Changes in temperature and rainfall patterns could lead to food price rises of between 3% and 84% by 2050.

“Climate change is acting as a brake. We need yields to grow to meet growing demand but already climate change is slowing those yields,”said Michael Oppenheimer, a Princeton professor and an author of the report.

Other food sources are also under threat. Fish catches in some areas of the tropics are projected to fall by between 40% and 60%, according to the report.

The report also connected climate change to rising food prices and political instability, for instance the riots in Asia and Africa after food price shocks in 2008.

“The impacts are already evident in many places in the world. It is not something that is [only] going to happen in the future,”said David Lobell, a professor at Stanford University’s centre for food security, who devised the models.

“Almost everywhere you see the warming effects have a negative affect on wheat and there is a similar story for corn as well. These are not yet enormous effects but they show clearly that the trends are big enough to be important,”Lobell said.

Wheat is the first big staple crop to be affected by climate change, because it is sensitive to heat and is grown around the world, from Pakistan to Russia to Canada. Projections suggest wheat yields could drop 2% a decade.

The report explored a range of scenarios involving a temperature rise of two degrees or more that saw dramatic declines in production in the coming decades. Declines in crop yields will register first in drier and warmer parts of the world but as temperatures rise two, three or four degrees, they will affect everyone.

In the more extreme scenarios, heat and water stress could reduce yields by 25% between 2030 and 2049.

The report acknowledged that there were a few isolated areas where a longer growing season had been good for farming. But it played down the idea that there may be advantages to climate change, so far as food production was concerned.

Overall, the report said, “negative impacts of climate change on crop yields have been more common than positive impacts.”Scientists and campaigners pointed to the finding as a defining feature of the report.

The scientists also detected climate having an effect on heatwaves, droughts and flooding across the globe and warned those events would take a disproportionate toll on poor, weak and elderly people. The scientists said governments did not have systems in place to protect those populations. Warming of more than two degrees would increase the risks of “severe, pervasive and irreversible”consequences, the report said.

The report also warned for the first time that climate change, combined with poverty and economic shocks, could lead to war and drive people to leave their homes. “Climate change can indirectly increase risks of violent conflicts,”the report said. It also warned that hundreds of millions of people in south Asia and south-east Asia will be affected by coastal flooding and land loss by 2100.

“The main way that most people will experience climate change is through the impact on food: the food they eat, the price they pay for it, and the availability and choice that they have,”said Tim Gore, head of food policy and climate change for Oxfam.

Friends of the Earth’s executive director, Andy Atkins, said: “We can’t continue to ignore the stark warnings of the catastrophic consequences of climate change on the lives and livelihoods of people across the planet.

“Giant strides are urgently needed to tackle the challenges we face, but all we get is tiny steps.”