Ukrainian forces have reclaimed the port city of Mariupol after heavy fighting with pro-Russian separatists.

The government said there had been many casualties after an operation to expel separatists in the city began at dawn on Friday. 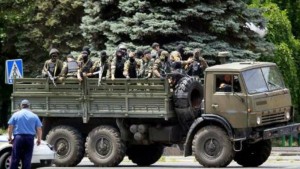 The advances appear to be significant victories for the pro-European leadership in a military operation to crush the armed rebellion that began in east Ukraine in April.

Interior Minister Arsen Avakov announced that Ukrainian forces had taken the city less than six hours after the attack began, in a post on Facebook.

An interior ministry aide said that government forces stormed the rebels after they were surrounded and given 10 minutes to surrender, the Reuters news agency reported.

At least five separatists and two Ukrainian soldiers were killed in the battle before many of the rebels fled.

Mariupol, which has changed hands several times in weeks of conflict, is strategically important because it lies on major roads from the southeastern border with Russia into the rest of Ukraine, with steel exported through the port.

Regaining control of the long and winding frontier is also vital for the government because it accuses Moscow of allowing the rebels to bring tanks, other armoured vehicles and guns across the porous border.

Avakov said the government forces had won back control of a 120km stretch of the border that had fallen to the rebels, but it is unclear who controls other parts of the roughly 2,000km frontier.

The rebels, many of whom want east Ukraine to become part of Russia and who have taken over several towns and cities, confirmed that five of their fighters were killed in the fighting for Mariupol.

Avakov said National Guard and Interior Ministry units were involved in the battle, as well as special forces.

A Ukrainian defence analyst, Dmytro Tymchuk, said four Ukrainian soldiers had been killed and 31 wounded in fighting in other parts of east Ukraine in the past 24 hours.

Rebels said Pushilin was not in the vehicle at the time.

The attack late on Thursday took place outside the headquarters of the separatist movement in the former regional government building in the heart of the coal mining city.

Ukrainian special forces are suspected to be behind the explosion, Barker said.

Government forces have recorded a number of successes in recent days including the disruption of supply routes along the Russian border.

Troops destroyed part of a column of rebel tanks and military vehicles crossing from the border of Russia near the town of Snizhnye on Thursday.