Government aide says armed men came from Russia in trucks and an infantry vehicle and tried to cross eastern boundary.

Fifteen pro-Russian rebels have been killed in clashes with government troops at a border crossing with Russia, according to an aide to the Ukrainian interior minister. 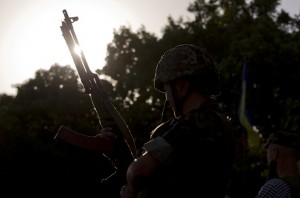 Speaking on a television programme late on Thursday, Anton Herashchenko said Ukrainian border guards clashed earlier in the day with armed men who came from Russia in trucks and an infantry vehicle, and tried to cross the border at the village of Marynivka in eastern Ukraine.

Herashenko said the attackers were supported by about 100 rebels who came from the Ukrainian side of the border.

He said five Ukrainian troops were injured and 15 rebels were killed. Their bodies were taken to a nearby town.

Government troops have for weeks been clashing with pro-Russian rebels who dismiss the Kiev government as illegitimate.

In a seperate development, Australian Prime Minister Tony Abbott said on Thursday that he expected Vladimir Putin to attend the Group of Twenty (G20) summit this year in Brisbane, despite the Russian president being banned from this week’s Group of Seven (G7) meeting.

Russia was axed from the G7 meeting in Brussels over its annexation of  Crimea, with Putin cold-shouldered by the United States and its allies since the March seizure of the peninsula.

Australia is the current holder of the rotating G20 presidency and hosts the leaders’ summit in Brisbane in November.

Abbott said that while he shared serious concerns over Russia’s role in Ukraine, there was no indication Putin would not be invited.

“The G20 is an economic meeting whereas the G7 or the G8 has tended to have a very strong security component,” he told Australian media in France late on Thursday, where he will attend the 70th D-Day commemorations, alongside Putin.

“Obviously there are very grave concerns about the behaviour of Russia in Ukraine and I can understand why the G7 leaders were reluctant to sit down with President Putin at this time.”

The G7 group is comprised of Britain, France, Germany, Italy, Japan, Canada and the US.

US President Barack Obama said on Thursday that Russia had to recognise Ukraine’s president-elect Petro Poroshenko.

In a statement after their summit, G7 leaders warned of tougher sanctions if the conditions set out by Obama were not met.