Ukrainian forces have raised the national flag over the pro-Russian rebels’ main stronghold of Slovyansk after flushing them out of the eastern industrial city, according to the country’s defence minister. 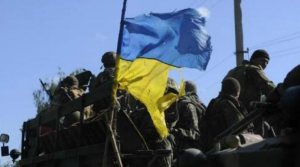 The announcement came hours after the interior minister announced that a large number of pro-Russian separatists had fled the city after attacks from Ukrainian forces.

“The Ukrainian national flag was raised over the Slovyansk city council before a line-up of Ukrainian soldiers,” Valery Heletey, defence minister, said on Saturday in a statement posted on the Ukraine president’s official website.

In a separate statement on his Facebook page, Arsen Avakov, the interior minister, said: “A significant number of militants have left … along the way, our battle group is ‘greeting’ them. They are suffering losses and surrendering.”

The Interfax news agency quoted the leader of the Donetsk People’s Republic, Aleksandr Borodai, as saying that his forces were pushed back by a “large-scale” offensive.

“Given the disproportionate numerical superiority of the enemy troops, units of the armed forces of the Donetsk People’s Republic were forced to leave their previous positions on the northern sector of the front and go to pre-prepared [positions],” he said.

The separatists had lost one tank and other armoured vehicles, the statement said.

Some of the rebels appeared to have moved to Kramatorsk but they were pulling out of there quickly on Saturday, the Reuters news agency reported.

They were apparently fearing air strikes from Ukrainian planes overhead.

“Whether the rebels are able to regroup and then push back, that is left to be determined,” he said.

“But this appears to be the most significant movement in the past few weeks.”

Slovyansk was seized by rebels in April. It became the separatists’ strongest redoubt in eastern Ukraine and a base for Igor Strelkov, a Russian-declared defence minister of the self-proclaimed Donetsk People’s Republic.

Russia has denied allegations by Ukraine that it has been fanning the separatist rebellion by allowing weapons and fighters to cross over the long joint border to support the separatists.

It has been pressing Poroshenko to engage in talks with the separatists and agree on a ceasefire.