Separatists to allow “humanitarian corridor” for encircled troops after intervention by Russian president. 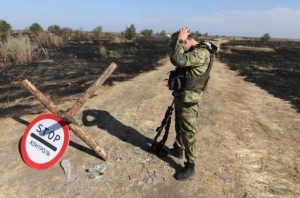 “We are ready to give a humanitarian corridor,” Alexander Zakharchenko, a rebel leader, told Rossiya 24 TV on Friday, adding that troops would have to leave their heavy armored vehicles and ammunition.

The move came hours after Putin issued a statement published on the Kremlin’s website overnight on Thursday, urging the separatists to “avoid unnecessary casualties”.

“I call on the rebel forces to open a humanitarian corridor for the Ukrainian troops who are surrounded, so as to avoid unnecessary casualties and to give them the opportunity to withdraw from the zone of operations,” said Putin.

The Ukrainian military said in a statement published on Friday that Putin’s call testified to only one thing – “these people (separatists) are led and controlled directly from the Kremlin”.

According to the rebels, up to 7,000 Ukrainian troops are trapped at several locations in the Donbass region.

Ukraine said on Thursday that the rebels had captured Novoazovsk with the help of Russian troops who had crossed over into Ukraine in “up to 100” tanks along with heavy weaponry.

Russia dismissed the allegations, describing the fighters as “Russian volunteers”.

The Kremlin has repeatedly denied arming and supporting the separatists who have been battling Ukrainian troops for four months in the gravest crisis between Russia and the West since the end of the Cold War.

On Friday, Anders von Rasmussen, the NATO chief, said that “despite Moscow’s hollow denials” it was now clear that Russian troops were “directly engaged” in Ukraine.

“We condemn in the strongest terms Russia’s continuous disregard of its international obligations. We urge Russia  to seize its illegal military actions, stop its support for armed separatists and take immediate and verifiable steps towards de-escalation of this grave crisis.”

Rasmussen also said that NATO was not closing the door to Ukraine’s possible membership after Kiev said it was seeking to join the alliance despite a pressure from Russia.

“I am not going to interfere with political discussions in Ukraine, but let me remind you of NATO’s decision taken at the Bucharest summit in 2008 according to which Ukraine will become a member of NATO, provided, of course, that Ukraine so wishes and provided that Ukraine fulfills the necessary criteria,” said Rasmussen.

US President Barack Obama spoke with German Chancellor Angela Merkel on Thursday, with both leaders agreeing that Russia must face consequences for its actions.

“We agree – if there was ever any doubt – that Russia is responsible for the violence in eastern Ukraine,” Obama said.

He added that Russia “has deliberately and repeatedly violated the sovereignty and territorial integrity of Ukraine, and the new images of Russian forces inside Ukraine make that plain for the world to see” But Obama ruled out a military confrontation between the US and Russia.