KIEV : Ukraine´s parliament on Thursday approved the nomination of pro-EU Arseniy Yatsenyuk as the crisis-hit country´s new prime minister until presidential polls are held in May. 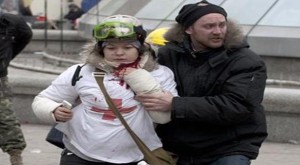 Yatsenyuk was one of the most prominent leaders of the three-month anti-government protests that swept Ukraine, culminating in deadly violence last week that precipitated the ouster of president Viktor Yanukovych and the collapse of his entire government.