Kiev says its artillery has hit column of armoured carriers that crossed from Russia as NATO confirms “incursion”.

Ukrainian security forces have attacked and destroyed military vehicles that were part of a column that crossed from Russia into eastern Ukraine, the office of Ukrainian President Petro Poroshenko has said in a statement. 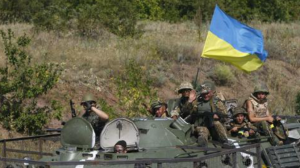 Poroshenko discussed reports of the incursion of armoured personnel carriers from Russia with British Prime Minister David Cameron and said that a “considerable part of this equipment was destroyed overnight by Ukrainian artillery”.

The latest incident has signalled the worsening of the country’s conflict with pro-Russian separatists who took over parts of eastern Ukraine, as Kiev accuses Moscow’s military of arming and backing the fighters.

Moscow has accused Kiev of attempting to disrupt a Russian humanitarian aid mission to eastern Ukraine and called for a ceasefire in the region to allow for the deliveries.

“We draw attention to the sharp intensification of military action by Ukrainian forces with the apparent aim to stop the path, agreed on with Kiev, of a humanitarian convoy across the Russia-Ukraine border,” the Russian foreign ministry said in a statement.

Britain said it summoned Ambassador Alexander Yakovenko to clarify the reports of the Russian military invasion.

Earlier, Russia let Ukrainian officials inspect an aid convoy while it was still on Russian soil on Friday and agreed that the Red Cross can distribute the goods in Ukraine’s rebel-held city of Luhansk. The twin moves aimed to dispel Ukrainian fears that the operation was a ruse to get military help to the pro-Russian separatists.

Russia had sent the convoy of 280 aid trucks towards a border crossing under the control of pro-Russia separatists in eastern Ukraine, raising the prospect that it could enter without being inspected by Ukraine or the Red Cross.

reporter, reporting from Slovyansk, said fighting was continuing in eastern Ukraine and that 14 people had been killed in the past 24 hours in Donetsk and Luhansk.

She said the convoy, carrying what Russian authorities say is much-need aid for people in eastern Ukraine, was still on the Russian border.

“An agreement has been made which will see the convoy move into Ukrainian territory, but it will not have [Russian] military escort,” she said.

Amid the tensions, AP reporters saw dozens of Russian military trucks and armored personnel carriers moving on Friday around the area where the trucks were parked, about 28km from the border in a Russian field.

Russia said that Russian forces were patrolling the border but denied that military vehicles had crossed into Ukraine.

The fighting in eastern Ukraine has claimed nearly 2,100 lives, half of those in the past few weeks. It began in April, a month after Putin annexed Ukraine’s Black Sea peninsula of Crimea.