Ukrainian border guards have started checks on a Russian truck convoy which is carrying aid earmarked for humanitarian relief in the east of the country, the border guards service has said.

“I can confirm that at 2:15pm the Ukrainian side began border-customs formalities relating to the Russian humanitarian cargo,” border guard spokesman Andriy Demchenko told the Reuters news agency on Thursday. 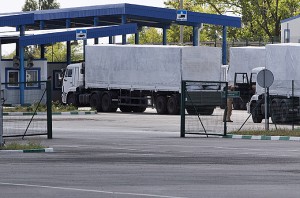 Asked on whose territory the cargo was, he replied: “On the territory of the Russian border point.”

Russia has been hoping to send a massive aid convoy of over 200 trucks to help civilians in the hard-hit city of Luhansk, but Ukraine fears the move is a ploy to aid pro-Russian separatists who have been fighting government troops.

Ukraine has accused Russia of arming and supporting the separatists since fighting began in mid-April, a charge Russia has denied.

On Thursday, Ukraine’s army said its forces in the east of the country had captured two Russian armoured vehicles with documents linking them to an elite army paratrooper unit.

Ukrainian troops have made significant advances into rebel-held territory this week in a conflict that has already claimed more than 2,000 lives and forced over 340,000 people to flee their homes.

The country celebrates Independence Day on Sunday and there are reports that the government in Kiev is aiming to achieve a breakthrough by that date.

Five troops were killed and two civilians died in the past 24 hours in rebel-held areas of eastern Ukraine as government troops pressed to recapture more territory from pro-Russian separatists.

Andriy Lysenko, spokesman for the Ukrainian National Security Council, said on Thursday that government troops were still fighting separatists in and around Ilovaysk, a town near the rebel-held city of Donetsk, even though he said Ilovaysk was under government control.