Andy Coulson, a former aide to PM David Cameron, found guilty of hacking while editor of the News of the World. 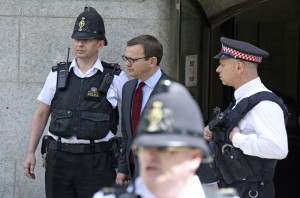 Andy Coulson, a former aide to the UK prime minister, David Cameron, has been sentenced to 18 months in jail for hacking the phones of actors, politicians and crime victims while editor of the News of the World.

Coulson was convicted of conspiracy last week after an eight-month trial stemming from revelations of illegal eavesdropping at the now-defunct Rupert Murdoch-owned tabloid.

Five others, including another former editor, Rebekah Brooks, were acquitted.

The defendants have said they did not know phone hacking was illegal, though the judge said they knew it was “morally wrong.”

Cameron, who has apologised for hiring Coulson after his spell at the newspaper, said of the sentence: “What this says is that it’s right that justice should be done and that no one is above the law.”

Opposition leader Ed Miliband has criticised Cameron for bringing a “criminal into the heart of Downing Street”.

That sparked widespread outrage across the country which forced Murdoch to close the 168 year-old tabloid just days later.

It emerged that the newspaper had listened into messages of countless targets – including actors, crime victims and ministers – to obtain information for scoops.