MUMBAI: Two sailors were missing and another seven were injured after smoke was detected aboard a submarine off Mumbai on Wednesday, Indian navy officials said, in the latest accident to hit the force. 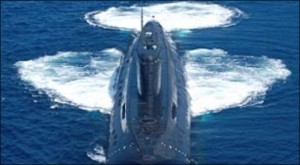 The seven sailors suffered smoke inhalation and were airlifted from the submarine for treatment, navy spokesman Rahul Sinha said, without disclosing details of the incident.

“The submarine was on a routine training sortie off Mumbai´s coast when smoke was detected.

Measures were taken to contain it,” Commander Sinha told the NDTV news channel.”All the sailors are currently undergoing treatment under the supervision of a team of doctors.

But I do not have details.” Another two crew have not yet been found on board the submarine which was now returning to port in Mumbai, an unnamed navy official in New Delhi told AFP.

The incident comes after 18 naval crew were killed in August last year when the fully-armed Russian-built INS Sindhurakshak exploded in flames and sank in a military shipyard in Mumbai.

The disaster was thought to be the Indian Navy´s worst since the sinking of a frigate by a Pakistani submarine during a war with its neighbour in 1971.

After Wednesday’s accident, naval ships have taken up posts around the Russian-built INS Sindhuratna to provide help, Sinha said.

The seven injured sailors fell unconscious after a leak in the submarine´s battery compartment during the training exercise near Mumbai harbour, according to the Press Trust of India news agency, citing navy sources.

Last month another submarine, INS Sindhughosh, reportedly armed and with a full crew, ran aground while returning to Mumbai harbour.