Tripoli, Libya – The air is thick in the Libyan capital, four weeks into a battle between rival militias that has shaken the city with the ferocious sounds of missiles and rockets, fired indiscriminately into built-up areas. 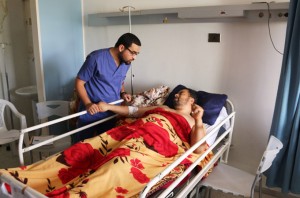 In one of the few cafes still open in Tripoli, three young men sit in an open-air terrace; usually filled by the aroma of fresh coffee, it is now overwhelmed by the stench of smoke. One man asks the group if this is where they saw the country going after the 2011 uprising the toppled long-time dictator Muammar Gaddafi from power; the answer is a resounding no.

Just over 15km away, the fire at Tripoli’s main fuel storage site is still burning. The site was hit in the fighting between rival armed groups one week ago as they battled for control of Tripoli’s airport. Meanwhile, the airport road, a motorway linking Tripoli’s international airport to the city, has been a front line for militias from Zintan, which control the airport and the road, and rival Islamist militias from Misrata and Tripoli, which control the city.

On Wednesday, Libya’s newly elected House of Representatives issued a decree calling for a ceasefire, and called on all parties to conduct talks under the supervision of the United Nations. The call went unanswered, however, and the fighting continued.

Both groups have used missiles, rockets, and tank shells in the fighting. Many of the rounds have missed their targets and hit civilian farms and homes. On Wednesday, a missile hit a flat in Janzour, a district in west Tripoli, killing 18 Sudanese nationals.

The fighting has resulted in hundreds of deaths, according to reports released by Libya’s health ministry, among them civilians caught in the fighting. The exact number of civilian casualties is unavailable.

“They can go to the desert and kill each other there, just stay away from us,” said Marwan, a shopkeeper in Janzour. “A missile landed in my farm yesterday, I was lucky. What if it had hit the house?”

So far, more than 6,000 Libyans have fled the country, according to the Tunisian foreign minister, with many from Tripoli escaping the violence to neighboring Tunisia.

But with the main airport closed due to the fighting, the only operating airport in the city is Metiga, a smaller landing strip that is currently being held by an Islamist armed group known as the Preventative Security Force. Demand for flights is high; tickets are only available at the airport itself, and queues of up to 12 hours are common.

The alternative is a dangerous two-hour trip to the Tunisian border by car, with a wait of up to 18 hours at the crossing due to the large number of people attempting to make the journey. The border between Libya and Tunisia has been unstable, and has not remained open consistently; on July 31, the border was closed after Egyptian workers fleeing Libya tried to storm into Tunisia.

Those who chose to leave also risk having their homes looted. One family in Gaser Ben Ghashir, a district of the capital where Misrata militias are based, left a note on their front door, saying: “There’s nothing in here worth taking, so please just leave it alone.”

Frequent electricity cuts are also plaguing the city. “Electricity is a pleasant surprise these days,” said Ibrahim Elmayet, a resident of Tripoli who said power cuts sometimes last for up to 11 hours.

The power cuts may also lead to a water supply shortage in central Tripoli, where reserves are slowly declining as electricity is needed to work the pumps that feed water to the city’s two million residents.

People have waited for three days at petrol stations to get fuel, sometimes going home empty-handed. “I pulled up to fill my car, waited two days and went home as I arrived, with no petrol,” said Abdul Wareth, a 21-year-old medical student at Tripoli University.

“We need petrol to get supplies for the house,” he added, explaining that with food prices rapidly rising, and empty shelves in many shops, people must now drive to get supplies elsewhere.

The rival militias have set up checkpoints to the west and south of the city, making it difficult to get around, even if fuel is available.

Hospitals and clinics in Tripoli have been hit hard by the shortages, and doctors are warning that they can’t provide basic services. “There’s nothing harder than turning down a patient who needs admission,” said Amal al-Hasari, a doctor at Tripoli’s central hospital. “On Sunday, only one doctor was in the accident and emergency wing of the hospital.”

She said the lack of fuel and risk of being caught up in the fighting is preventing doctors and nurses from getting to work.

Locals have tried their best to keep the capital’s health services running. On Tuesday, a man came to the hospital, asked Hasari if she was a doctor, and then gave her some petrol, she recalled. He also gave her his number and said she could call him whenever she or any other doctor needed fuel to get to work.

“We are running out of oxygen masks and antibiotics,” Hasari said, adding that with no airports operating to full capacity, no one knows when supplies will be restocked. “We can only hope and pray for better days to come.”