KARACHI: With more than 32 bodies recovered from the sea, two families — one from Baldia Town and the other from Korangi — waited on Friday at the Clifton beach watching ambulances and other volunteer services in the hope of seeing the remains of their loved ones. 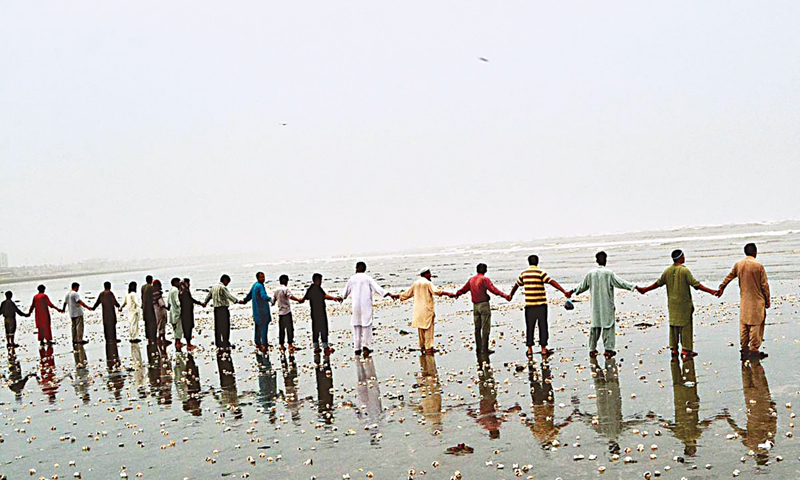 Two men from Baldia were inquiring if the Navy helicopter would return. “Our little nephew, 14-year-old Nasir, returned home on Eid night with two sets of clothes and pairs of shoes of his cousins, 20-year-old Mohammad Irfan and 17-year-old Mujib. He said they handed him their stuff before going for a dip in the sea. But he grew tired waiting for them and returned home after a couple of hours. That’s when we raised alarm,” said Mohammad Ayub.

“They found Irfan’s body on Thursday evening but Mujib is still missing,” said Ataullah, the other cousin.

“The prayers for their lives have not been answered. We know they are gone but now we pray to God that at least let their bodies be found so that we can give them a decent burial,” wept a female cousin of 17-year-old Hamza, missing for three days when he and his other cousins in Korangi headed to the beach.

“Hamza was with his cousin, 19-year-old Sabir, whose body was recovered this morning, and 10-year-old little brother we lovingly call Munna at home. Munna is in shock after he was pushed out of harm’s way by Sabir before being caught in the strong currents himself.

“Munna watched his brother and cousin Sabir disappear before his eyes. He hasn’t spoken ever since. We buried Sabir soon after his body was recovered. Now we are waiting for these heartless waves to return us Hamza, too,” the veiled woman, who declined to give her name. She had with her an old childhood photograph of the boy still missing.

“It is all we could find in this emergency,” she said.

“We have been sitting here waiting for some miracle at first and now the inevitable for three days now,” she said quietly.

The skin of her hennaed hands and forehead were sunburnt due to sitting in the sun for too long. Noticing a reporter’s gaze on her hennaed hands she started weeping. “We were all so happy before Eid, buying new clothes and decorating our hands with henna designs. Who knew then that we would lose two young men in our family like this?” she cried.

“All these rescue workers and security agencies have been amazing after the accident. Wish they had been this efficient before it happened,” she said.

The woman was accompanied by Mustafa, brother of Sabir, who had been recovered. “My brother was six years older than me. He has been the family elder since our father passed away,” he said. “When they pulled his body out, it was so swollen with water and in such a bad shape that we couldn’t even recognise it. Then I noticed an old scar on his wrist to make the identification,” he said.

Outside the mortuary at the Jinnah Postgraduate Medical Centre, two volunteers of the Khidmat-i-Khalq Foundation said that the bodies being recovered at this point were in such a shape that even their family members were afraid to go near them. “We are also helping with the bathing and burial of the victims due to this,” said KKF operator Ijaz Siddiqui.

“Death by drowning is a horrific end to life. You have to understand that the body only comes up, floats and is washed ashore after ballooning up due to water absorption,” explained KKF operator Danish Abdul Qadir.