ON its first birthday the Abbott Government will be pondering its most painful lesson: Voters grateful for removal of the Labor turmoil don’t stay grateful forever.

Prime Minister Tony Abbott — and in particular his Treasurer Joe Hockey — have been chastened by this crash course in the difference between Opposition and Government. 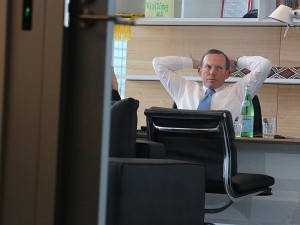 The new Government ditched promises — such as a pledge for wide consultation on matters, and introduced new measures — such as the revival of knighthoods, with the arrogance of a big election winner.

It has defied advice, such as the multiple recommendations it spend more on child care rather than paid parental leave, for vague reasons of “captain’s pick”.

There was no fear of the battered and disorganized Labor Opposition.

The explosion of criticism after the May Budget reinforced this.

The Government believed it could woo western Sydney while they were in Opposition, and then propose extra health and petrol costs on those same voters in a Budget, and escape any substantial backlash.

Treasurer Hockey’s berating of voters for being reluctant to accept the Budget was a mistake.

The Government thought it could make the Senate cross bench members bow to the mandate presented in Opposition and back legislation. They haven’t and are growing more obstructionist rather than less. It was a huge miscalculation.

Clive Palmer’s Palmer United Party has twice stampeded the Government into hasty agreements, once on removing carbon pricing and then on removing the mining tax. Those Labor leftovers were abolished on his terms, not those of the Government.

Meanwhile, Tony Abbott has immersed himself more than anticipated in global politics, preparing Australia for possible military involvement in Ukraine and Iraq.

Suggestions he is doing this to distract from domestic problems are incorrect. Mr Abbott is being true to his beliefs.

He has great respect for the military, and believes that like an individual, a nation must stand up for its values.

And his increased international travel schedule also is justified. As Prime Minister, Mr Abbott has accepted an Australian leader must go to our neighbors and allies, because it is difficult for their leaders to get here. Australia is not on the way to anywhere except New Zealand.

Those first year lessons have come home with a lot of pain but don’t seal the fate of the Government. It has two years of incumbency in which to recover.

And so far Labor has been unable to mobilize to trouble that recovery.

Tony Abbott used to sneer at Kevin Rudd’s evocation of Australia as an influential middle power, but as Prime Minister he has become an arch internationalist.

That’s just one change in the man who won office and then found government was not as easy as Opposition. Not by a long shot.

He has been through so many changes his declaration of principles — his book Battle lines — is in many parts becoming a list of things he no longer believes in.

Tony Abbott still has those personal characteristics which made him an interesting backbencher and a forthright minister. But he is having trouble adapting some of those characteristics to national leadership.

That could be one reason why his personal rating with the electorate has fallen since he took office. The Tony Abbott in government is different to the one in Opposition.

In a range of opinion polls, anywhere from 20 per cent to 25 per cent of voters have no comment to make on Bill Shorten’s Labor leadership.

That means as much as a quarter of the electorate doesn’t know he’s there. That or he simply disappears in a haze of talking heads seen on TV, none of them distinctive.

In part, this is because the electorate is concentrating on the Government and its policies. And it would be unrealistic to expect a clearly defined Opposition Leader and Opposition policies could spring fully formed from the wreckage of six years of Labor turmoil in government.

However, Mr Shorten is now approaching a year in office and while opinion polls show the Government and Tony Abbott are on the nose, there is no substantial suggestion electoral affections are turning strongly to Labor.

Mr Shorten hasn’t had the time to free himself from the Rudd-Gallard policy legacy. In secret, he is probably happy he no longer has to defend leftover measures such as the mining tax, that have now been abolished.

But Labor seems a long way from presenting as an alternative government. Tony Abbott showed how negative campaigning could win power and the temptation is for the Labor Opposition to follow his lead.

Scott Morrison looks like a man who buys smugness by the barrel, and has strong reasons for his grins.

If a runaway bus cleaned up Tony Abbott, it is likely Mr Morrison would be the replacement Prime Minister.

A Morrison government would not please many Australians who are angry about his management of asylum seekers. But much of the Liberal base, and a significant number of voters in Labor’s traditional demographic think he’s done a terrific job stopping the boats.

He appears impervious to attacks, even those which question his compassion, and is relentless in his pursuit of his “border protection” objectives.

Mr Morrison is famous within his party for attending the breakfasts of both the right and the moderates at one Liberal conference. He is ambitious and — bus accident or no bus accident — is looking for a promotion.

After the inconsiderate Kevin Rudd, and the interim Bob Carr, our diplomats are delighted to have Julie Bishop as minister.

She works hard, devours briefs, and even comes down the hill to the Department of Foreign Affairs and Trade offices rather than summon officials up to Parliament House.

Ms Bishop has had one of the toughest learning-on-the-job periods of any minister, and part of her role has been to rein in the aggressive, new internationalism of her Prime Minister.

First, she has had to deal with a rupture in relations with Indonesia following revelations of spying on the President’s wife and intrusions into Indonesian waters chasing away asylum seekers.

More recently, she has had to manage Australia’s involvement in the Ukraine and Iraq powder kegs, and arrangements for the G20 summit in Brisbane in November.

Less obvious, Ms Bishop has fought to prevent further cuts to foreign aid, already the biggest loser in the May Budget. She has managed to set up a New Colombo Plan to send young Australians overseas — in defiance of the mood to cut grassroots contacts within our region.

Senator Cormann has had greatness thrust upon him by the less than great performance of two colleagues.

Treasurer Joe Hockey has been occupied by his own missteps, while Assistant Treasurer Arthur Sinodinos stood aside during an ICAC investigation — to which he has been a witness not an accused.

That left Senator Cormann carrying more than the usual weight of duties in selling what has been rated one of the Commonwealth’s most unpopular Budgets.

He has been a calmer voice than that of his Treasurer colleague, and hasn’t berated the voters for not immediately accepting the Abbott government’s first economic statement.

And he has become a Liberal mainstay in the Senate where the Government’s leadership team of Eric Abetz and George Brandis has not been without critics.

The transformation of Joe Hockey in public eyes from world’s nicest bloke to Budget villain has been sudden, and is possibly permanent.

Treasurers often have to carry the weight of selling unpopular Budgets, but Mr Hockey seems to have gone out of his way to berate voters for not accepting his brilliance.

He has had public displays of exasperation and tut-tutting over the unpopularity of his first economic statement. And he’s had the ignominy of a public rebuke by his Prime Minister over clumsy comments on the poor and cars.

To rub it in, his heartily authorised biography revealed a petulant side to the jovial Joe of morning TV. He nearly quit when offered Small Business by John Howard in 2001, he doesn’t trust Malcolm Turnbull, and dislikes Ian MacFarlane. Tony Abbott wouldn’t let him have a tougher Budget.

And he decided at age eight he wanted to be Prime Minister. That date with destiny has been put off, perhaps forever.

Labor’s post-election leadership contest was between Bill Shorten and Anthony Albanese, but since then a third option has been promoted.

There is significant backing for Deputy Opposition Leader Tanya Plibersek to take over should one of those particularly nasty public transport accidents wipe out Mr Shorten.

Anthony Albanese is widely respected within Labor as a faithful and often selfless servant of the party. However, he has a lower rating as an election winner.

Ms Plibersek, the archetypal youngish working mum, has emerged as a level-headed leadership prospect. Certainly she is one of a sizeable group who have this potential.

Her move to foreign affairs was an indicator of renewed ambition, and the expanded numbers women have in Labor’s shrunken House of Representatives benches gives her a potentially crucial support base.

There is respect for Chris Bowen on both side of Parliament, and he gets a better reception from the Government in Question Time than most Labor front benchers.

Part of that respect comes from his behaviour during the leadership campaigns. He backed Kevin Rudd to again become Prime Minister, but did it without public dramatics or double-dealing.

And he has first-hand experience in the Treasurer’s office which is vital to the Opposition’s economic argument. He was Treasurer for just three months but has been Treasurer or Assistant Treasurer for close to two years.

Tony Burke also is respected for his performance in the Labor leadership battles. He stayed with Julia Gillard and tended his resignation to the victor Kevin Rudd. Mr Rudd declined to accept it.

Mr Burke also has the job of managing Labor’s tactics in the House of Representatives, dealing with the Leader of the House, the Education Minister Christopher Pyne.

It’s a tough responsibility when the Government has such a massive advantage in numbers, and can effectively do what it wants within the usual legal boundaries. But it is a good platform for influence in the Opposition’s broad strategy major decisions.