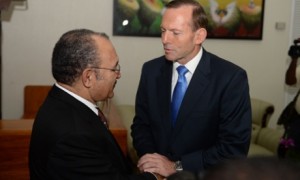 Tony Abbott has backed his Papua New Guinea counterpart’s suspicions that most detainees on Manus Island will not be found to be genuine refugees.

The first asylum seekers found to be genuine will be resettled in PNG as early as May, as soon as the country’s parliament approves the program, Abbott said.

But they are likely to be a minority, with the PNG prime minister, Peter O’Neill, and now Abbott hinting that most will be found to be economic refugees, rather than in fear of persecution in their home countries.

O’Neill said on Friday he suspected “a good majority” of asylum seekers would not pass muster. Abbott said he would wait to see what the outcome of the PNG processing was, but he agreed with O’Neill.

“I think there’s a lot that we’ve seen that justifies that suspicion,” Abbott told reporters during his first official trip to Port Moresby on Saturday.

O’Neill has said PNG was prepared to resettle some but not all of the refugees.

He and Abbott have reiterated calls for other countries in the region to “share the burden”.

Abbott said after his discussions he was confident there would be “swift processing, swift repatriation and swift resettlement”.

The PNG cabinet would be finalising matters in April for it to be dealt with in parliament in May, paving the way for the first detainees to be released from detention in May and June, he said.

It would be a matter for the PNG government as to when those people would get citizenship or family reunion rights, he added.

He claimed the Manus Island detention centre – together with temporary protection visas and Australia’s preparedness to turn the boats around – as a success.

“The boats are stopping,” he said. “It’s now more than three months since we had a successful illegal people-smuggling venture to Australia.”