By Farahnaz Ispahani, Special to CNN

International Women’s Day, being marked Saturday, is as good a time as any not just to celebrate how much progress has been made, but also how much 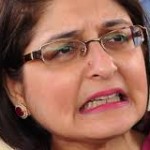 farther there is to go on the road toward guaranteeing women’s rights. Sadly, for women in at least one country, the journey is getting increasingly arduous.

For decades, the status and rights of women in Pakistan have been a casualty of concessions made by the state to those clamoring for what they describe as Islamic rule. But with the Taliban’s call for the imposition of Sharia law during current peace talks between the Tehreek-e-Taliban Pakistan (TTP) and the Pakistani government, there are growing concerns that women’s freedoms will be further eroded.

As we have seen in numerous conflict zones over the centuries, women’s participation in negotiations increases the chance of humanitarian concerns being at the center of the negotiating process. Without their involvement in the peace and security process, their voices and rights – as well as those of minorities – are generally ignored.

It is ironic that the country that gave the Muslim world its first female prime minister is today held hostage by reactionary ideologues and their appeasers. The late Benazir Bhutto was murdered for taking a stand against extremist forces, while young Malala Yousafzai was attacked on a bus by extremists for having the courage to challenge the Taliban’s writ against female education. But those leading Pakistan today sadly lack the will and the strength displayed by these two women to defend Pakistan against the forces of barbarism.

The Pakistani Taliban has officially existed since 2002 and, although comprised of disparate groups, its members share the worldview of the Afghan Taliban, which ruled most of Afghanistan during the late 1990s. And the Taliban’s misogyny is well known – it imposed a violent and narrow view of religion in a way that resulted in great suffering among Afghan women, children and religious and ethnic minorities.

Unfortunately, there is no indication that the Pakistani Taliban is any different.

When the TTP secured control of the Swat Valley in 2008-2009, its rule was as brutal as that of Mullah Omar’s Afghan gangs a few years earlier. Women were forced to stay at home. Female children were denied schooling. Public lashings of women took place – for perceived infidelities or sometimes just stepping out of their homes. Pakistani women, including those from the tribal areas, deserve better than to have to live in such a barbaric culture.

Fast forward to today, and the Taliban’s refusal to accept Pakistan’s constitution is a complete repudiation of the Pakistan that was envisaged by the country’s founder, Quaid-e- Azam Muhammad Ali Jinnah. Since the Objectives resolution, passed by Pakistan’s Constituent Assembly in 1949, successive Pakistani governments have gradually ceded ground to Islamists, hoping each time that the latest concession would hold extremism at bay. That strategy, if it can be called such a thing, has resulted in anti-women Hudood ordinances and anti-minority blasphemy laws.

Already, around two-thirds of Pakistan’s women are illiterate, while around 1,000 women and girls are victims of “honor killings” each year, according to Pakistan’s Human Rights Commission. Previous estimates have suggested between 70 and 90 percent of women in Pakistan have faced domestic violence.

The picture is no better economically – the World Economic Forum’s latest Global Gender Gap Report ranked Pakistan 135th in the world in terms of gender equality, and it has previously cited physical and sexual violence, honor killings, forced marriages and structural inequalities within society as factors responsible for the abysmally low ranking.

The Taliban’s version of Sharia will diminish women’s education opportunities while increasing violence against women, violence that is justified in the name of religion. On International Women’s Day, I urge Pakistanis to consider the disastrous consequences for the country’s women of appeasing the Taliban before the country turns down a road from which it won’t be able to return. (Farahnaz Ispahani, a former member of Pakistan’s parliament, is currently a Public Policy Scholar at the Woodrow Wilson Center in Washington DC. The views expressed are the writer’s own.) Soruce: CNN