LOS ANGELES: Australian actor Chris Hemsworth and his wife are celebrating the arrival of twin baby boys in Los Angeles. 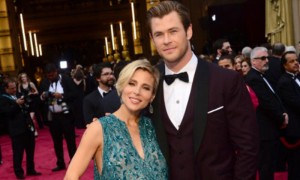 Elsa Pataky gave birth to the boys — who will join a 22-month-old daughter the couple already have — on Thursday in Los Angeles’s Cedars Sinai hospital.

The TMZ celebrity news website reported there was tight security at the celebrity hospital, with two security guards outside their room’s door and another accompanying Hemsworth.

The hunk actor — the star of two “Thor” films as well as 2012’s record-breaking “The Avengers” — married Spanish model/actress Pataky in 2010.

Born in Melbourne, the 30-year-old appeared in Australian soap “Home and Away” and made his big-screen debut in 2009’s “Star Trek.” But it was the “Thor” movies that catapulted him to wider prominence.

He is the older brother of “Hunger Games” actor Liam Hemsworth. Their older brother Luke is also an actor, mostly on television including in Australian soap “Neighbours.”