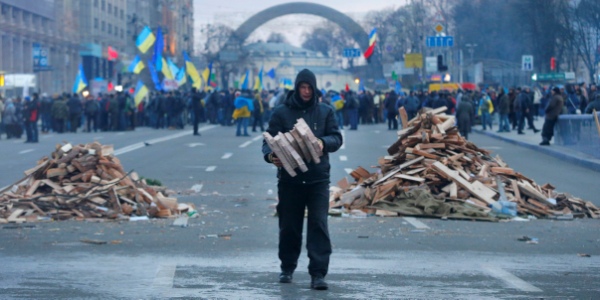 Two leading Ukrainian rabbis have warned of the danger facing Ukraine’s 200,000-strong Jewish community from the upsurge of neo-Nazi violence that toppled the government on the weekend (22-23 February).

Proving that the neo-Nazis were no mere fringe element in the coup, but were in fact the driving force behind it, the new Internal Affairs minister has announced he plans to incorporate the most violent of the neo-Nazi groups, the so-called Right Sector, into his ministry, which is responsible for domestic law enforcement.

Rabbi Moshe Reuven Azman of Kiev has urged Jews to flee from the country following several attacks on Jews in that city. “I told my congregation to leave the city centre or the city all together and if possible the country too,” Rabbi Azman told the Israeli daily Ma’ariv on 21 February. “I don’t want to tempt fate,” he added, “but there are constant warnings concerning intentions to attack Jewish institutions.”

Edward Dolinsky, executive director of the Ukrainian Jewish Committee, described the situation in Kiev as dire, tellingMa’ariv, “We contacted [Israeli] Foreign Minister Avigdor Lieberman requesting he assist us with securing the community.” The 25 February Times of Israel reported that Rabbi Menahem Margolin, head of the European Jewish Association, “In a letter to Prime Minister Benjamin Netanyahu and Defense Minister Moshe Ya’alon, urgently requested that Israel ‘send trained security guards to protect Jewish communities in Ukrainian cities and towns’. Ukrainian Jewish communities throughout the country are seriously concerned and feel helpless in the face of ‘a growing wave of anti-Semitic attacks’, the letter stated, citing the recent example of a Molotov cocktail thrown at a Chabad centre in the eastern city of Zaporozhye, a threatening phone message left for a rabbi in Kryvyi Rih calling for him to leave the city, and anti-Semitic graffiti found in Kiev and other locations. The reports indicate a ‘Jewish emergency’, according to the letter sent by the Brussels-based EJA head.”

Rabbi Yaacov Dov Bleich, chief rabbi of Kiev and Ukraine since 1990, issued a warning to Jews in Ukraine: Be vigilant, stay away from the protests and avoid the centre of Kiev.

Rabbi Bleich said that the majority of protesters are not anti-Semites, however there is an element among the opposition, including some within the nationalist Svoboda party, which includes “among its rank-and-file members nationalists, some of them are neo-Nazis or neo-fascists, people who are not embarrassed to say they hate Jews.”

His warning, particularly about the Svoboda party, was echoed by Rabbi Pinchas Goldshmidt, president of the Conference of European Rabbis. Rabbi Goldshmidt, reported the 26 February Jerusalem Post, “has warned that tolerance of anti-Semitic statements by the Ukrainian government and opposition parties—such as Svoboda—give anti-Semites free reign to attack Jews. Party head Oleg Tyahnybok stated recently that ‘Ukraine is being controlled by a Russian-Jewish mafia’.”

In 2012 the Simon Wiesenthal Centre ranked Tyahnybok number five in its international top ten anti-Semites. Svoboda marches under the red and black flag of Stepan Bandera’s Organisation of Ukrainian Nationalists (OUN-B), from which his organisation is directly descended, and portraits of Bandera are omnipresent on the Maidan. Until 2004, Svoboda was called the “Socialist-Nationalist Party of Ukraine”, echoing the name and carrying the swastika symbol of the German National Socialist (“Nazi”) party. Bandera’s OUN-B fought alongside the Nazis when they invaded Ukraine in 1941, and that year issued a manifesto entitled “Struggle and Action of OUN During the War”, which stated “Moskali, Poles, and Jews are hostile to us and must be exterminated in this struggle.” (Moskali is derogatory Ukrainian slang for “Muscovites”, for Russians.) Accordingly, Bandera’s OUN in 1943 carried out mass exterminations of Poles and Jews, killing an estimated 70,000 civilians in the summer of that year alone, which was only one part of their campaign of mass executions.

Pointing to the fact that “in one week in September 1941, at least 34,000 Jews were mass murdered … by the Nazis and their Ukrainian collaborators”, Rabbi Abraham Cooper, associate dean at the Simon Wiesenthal Centre, in the 25 FebruaryJewish Journal observed with understatement that, “Unfortunately, among the masses of people” gathered in the Maidan, “There were members of the nationalist Svoboda party, which has neo-Nazi roots, and some of whose leaders have openly expressed anti-Semitic views.” Rabbi Cooper concluded with an account of the results of the previous mass Nazi movement in Ukraine, “The total civilian losses during the Nazi occupation of Ukraine in World War II, is estimated at seven million, with over one million Jews shot by [Nazi] Einsatzgruppen killing squads and Ukrainian collaborators in Western Ukraine.”

The Svoboda party and its shock troops in the “Right Sector”, are led by the literal sons and grandsons of those Nazi Bandera “Ukrainian collaborators”, as established in the Feb/Mar New Citizen newspaper and in similar accounts which are now slowly beginning to appear in other European and US media accounts as well, despite an almost Goebbels-style black-out since November. What are the consequences for Ukraine’s Jewish population, and for the world as a whole, if an EU/Anglo-American-backed and virulently anti-Semitic, anti-Russian government consolidates power in Ukraine, on the very borders of Russia itself? One committed, in the words of the neo-Nazi Right Sector’s Dmytro Jarosh, now a leading contender for deputy prime minister of Ukraine, to a final showdown with Russia? Spokesmen for the Right Sector described themselves to Canada’s 7 February Globe and Mail as an “army” that supports Svoboda, and which has “a cache of weapons sufficient to fight a civil war.”

To help avert a looming new holocaust in Ukraine, and to stop the present slide to a thermonuclear war triggered by those Western forces who continue to back this neo-Nazi insurgency, call Australian Foreign Minister Julie Bishop, and demand that Australia publicly denounce this re-emergence of fascism in Europe, and that she deliver that message to our allies in the U.S. State Department who have provided support and direction to this insurgency. And the CEC again calls on Michael Danby, the ALP Member for Melbourne Ports who is a major leader of the global “democracy” movement that has helped orchestrate the events in Ukraine, to also denounce this ongoing coup attempt which now poses a mortal danger to Ukraine’s Jewish community, to all citizens of Ukraine, and to the entire world.