Scholarships have been announced for the special children of Iqbal Memorial Special Education Trust, Karachi Pakistan 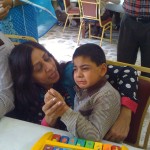 (students) of Iqbal Memorial Special Education Trust (Pakistan). It has been announced by Mrs. Surraya Hassan, the founder & one of the directors of Chand Raat Eid Festival (Australia) Inc. during her visit to Iqbal Memorial School for special children in Karachi. Mrs. Hassan while talking to the board members of the Iqbal Memorial Special Education Trust, announced that her organisation which organises Chand Raat Eid Festival (CREF) in Australia was looking for a deserving school where financial assistance can be provided to the deserving children and she found that the special children of Iqbal Memorial School deserved to be financially supported through scholarships.

Mrs. Hassan visited the school and met with teachers, staff and students. On the occasion, the Administrator of the Iqbal Memorial Trust Mr. Maqsood Ahmed Khan said that it has been a pleasure for the entire management of the school and the trust that Chand Raat Eid Festival organisation decided to support Iqbal Memorial Trust by awarding scholarships to special children of their school. He said his organisation is very proud of Overseas Pakistanis like Syed Atiq ul Hassan 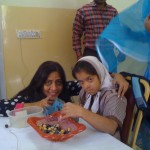 and Surraya Hassan who have brought Pakistan’s name in Australia and promoting Pakistani culture and tradition for the last 20 years or so. Mr. Zulfiqar Hussain Khurram, the Senior Vice President of the Trust told the media that he has been watching for many years how consistently with devotion and commitment Mr. Syed Atiq ul Hassan, Surraya Hassan, their family and team organising Chand Raat Eid Festival in Sydney are building a bridge between Pakistan and Australia for the last 15 years. Mr. Khurram said that he visited last year to attend Chand Raat Eid Festival. He said that he did not realize before that such a huge scale event such as Chand Raat is being organised in a country such as Australia. He said that all credit goes to Mr. and Mrs. Hassan and their vision, he feels proud that their long-term goal to provide South Asian children education is coming true, as now they have announced an educational assistance scheme for Pakistan which is a great and noble project and we all should appreciate them. 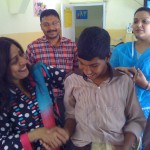 The financial support to the impoverished in education is the scheme of the organisation of Chand Raat Eid Festival (CREF). The funds raised from the event will be donated in providing financial assistance to the needy children for education in Pakistan.