THERE are no streets or houses, let alone a corner shop. There’s no weekend footy competition, not even an oval. Just mile after mile of rocky, red dust.

But the inhospitable surface of Mars, where temperatures can plummet to as low as minus-143C, is where Jake Sinclair hopes to live out the rest of his life. 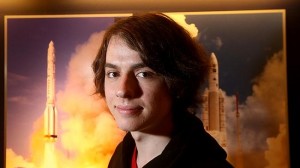 It’s a long way from home for the 19-year-old from Doonside, in Sydney’s west, who is among the final 705 candidates — 30 of them Australians — vying for a spot in humanity’s first colony on Mars, to hopefully be established in 2024.

But there’s a catch. Because of the lack of resources and technology, once you’re there, there’s no coming back.

Mr Sinclair, who like every kid before him grew up dreaming of being an astronaut, was among 200,000 people who put their names forward for the Mars One project, which describes itself as “a not-for-profit foundation that aims to establish a permanent human settlement on Mars”.

He is even willing to defy his mum and ditch his girlfriend — all in the name of space travel.

“My mum brings it up every now and again and gets sad that one day I might leave her and go to another planet and she will never see me again,” said Mr Sinclair, a graduate from St Marys High School, who is now undertaking a music degree at university. “Death is a very real possibility.

“I am young so I can dedicate the rest of my life to the project.

“I’ve only recently had a girlfriend and she knows I’m planning on going to Mars.

“ It’s a case of she understands that, if I do go through the process, that I’m not going to say no.

“It has always been a dream of mine to go into space and travel to the stars.

“Since the Moon landing and the international space station went up there has not been a huge call for astronauts.”

Based in the Netherlands and the US, Mars One will start training wannabe ­astronauts by sending them to an as yet unknown remote location from 2015.

The average distance between Earth and Mars is about 225 million kilometres and Mr Sinclair said it would take about seven months to get there.

“If I do get to have my famous first words, I plan on stepping out of the ­capsule, looking around for a minute, ­turning around to the rest of the crew, and saying ‘this wasn’t in the brochure’,” Mr Sinclair said.

“Perhaps then I will have a quote from a famous philosopher — if I can just ­remember one.”