MACAU: Martial arts fantasy “The Grandmaster”dominated the Asian Film Awards on Thursday with seven wins including best movie, as its emotional director mourned the film’s stuntman who was on the missing Malaysian jetliner. 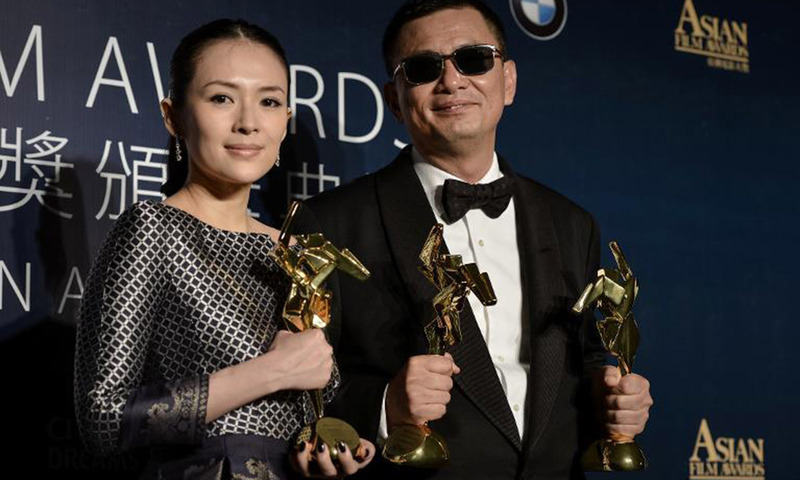 India’s “The Lunchbox” was the only other film to win multiple prizes at the star-studded event at Macau’s City of Dreams casino resort, winning awards for best actor and screenwriter.

“The Grandmaster”, inspired by the life of Yip Man — the mentor of legendary kung fu star Bruce Lee — scooped awards in most other major categories, including best director for Wong Kar-wai and best actress for Zhang Ziyi.

But despite the big wins a sombre mood hung over the film crew, with Wong using his acceptance speech to ask Malaysia for greater transparency in the search for Malaysia Airlines flight MH370 which went missing on March 8 with 239 people on board.

“One of our martial arts directors unfortunately is one of the victims of MH370, so here I hope the Malaysian government can try their best to address this issue by taking a more transparent attitude… and to let us know the truth,” Wong said.

Malaysia has come under scathing criticism for its handling of the search, with relatives of the mostly Chinese passengers on board accusing the government and airline of a cover-up and a botched response.

Ju Kun, 35, was reportedly on his way to Beijing to visit his family.

“Today I am very emotional about (our) crew member and friend. We’ll have to say goodbye to him forever,” said Zhang.

“The Grandmaster”, a stylised martial arts epic which was in production for more than six years, spans several decades of Chinese history and features lengthy battles between rival kung fu masters.

Wang said making the film was an “adventure”.

“It started as a dream, later it became an obsession and finally reality,”he said.

But Hong Kong actor Tony Leung Chiu-wai, who plays the eponymous “Grandmaster” lost the best actor award to India’s Irrfan Khan, who played a lead role in “The Lunchbox”.

“The Lunchbox” serves up a bittersweet romance between two strangers in Mumbai brought together by mistaken lunch deliveries.

The Asian Film Awards, organised by the Hong Kong International Film Festival, have been held annually since 2007, aimed at showcasing the region’s movie talent.

Twenty-six films from 13 countries and regions vied for 14 prizes this year.

Here is a list of some of the other top winners: Best Newcomer: Jiang Shuying (So Young — China)